SINGAPORE, June 12 (Yonhap) -- Tensions were running high in Singapore on Tuesday, as watertight security measures were enforced for the opening of the historic summit between North Korean leader Kim Jong-un and U.S. President Donald Trump.

From early Tuesday morning, the Singaporean government has deployed about 5,000 security and police officers on major roads leading to and around Sentosa Island's Capella Hotel, the venue of the summit.

On Tanglin Road, through which the motorcades of both Kim and Trump passed to reach Sentosa Island, police officers were stationed at each crossroads, about 50 meters apart, and police motorcyclists, their bikes' sirens blaring, examined all the main intersections. 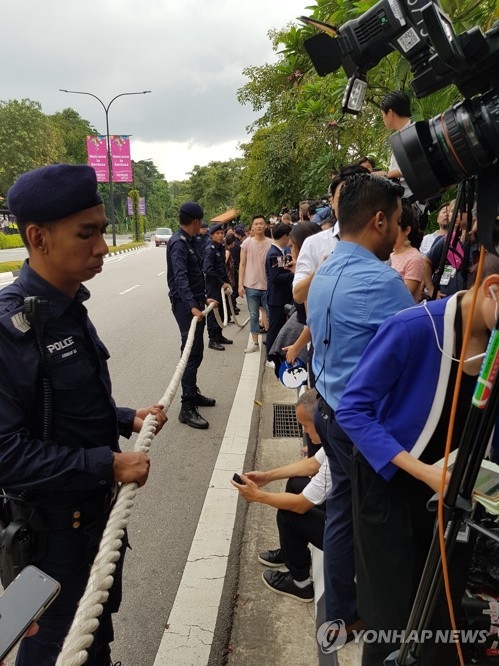 On the sole bridge connecting mainland Singapore and Sentosa, police blocked two of the four lanes to facilitate the inspection of vehicles and prepare for a possible blockade. There was a screen fence about 2 meters tall on the bridge so that vehicles could not be seen from the sidewalk.

The screen fence extended into the premises of the Capella Hotel, while police officers stationed every two meters on the road blocked the passage of reporters as well as ordinary people. Around 10 officers stood at a temporary checkpoint at the entrance of the hotel.

The Singaporean police authority also issued a public notice early in the morning, warning about traffic congestion on major roads leading to the St. Regis Hotel and Shangri-La Hotel, where Kim and Trump were respectively staying. 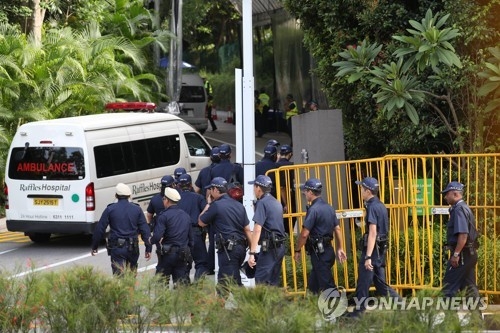