SEOUL, June 12 (Yonhap) -- Prosecutors are preparing to investigate fresh allegations that the main opposition party engaged in massive opinion rigging during past elections, including the 2007 presidential vote.

The Liberty Korea Party (LKP) is accused of having used a computer program to spread favorable news and jack up likes on Internet news comments from 2006 to 2014, during which it was called the Grand National Party and later the Saenuri Party.

The Seoul Central District Prosecutors' Office said Tuesday it has assigned the case to a criminal inquiry team. It will decide if the team will directly investigate the case or refer it to the police.

The ruling Democratic Party (DP) filed a complaint last Thursday against the LKP a day after a newspaper report raised the allegation.

The incident came amid a separate case of online comment manipulation involving an influential blogger known as Druking, who is allegedly linked to Kim Kyoung-soo, a former aide of President Moon Jae-in.

Kim, a former DP lawmaker who is running in Wednesday's local elections, has denied any wrongdoing.

A special counsel team has been formed to investigate the Druking case. 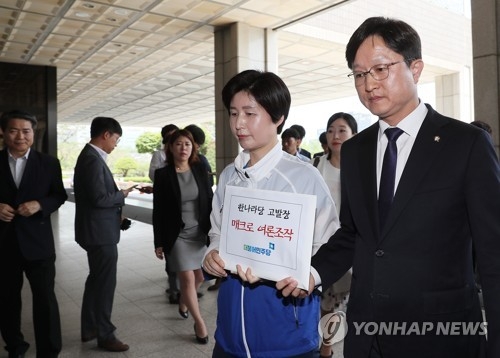