Outstanding household loans extended by the nation's financial institutions rose by 6.8 trillion won (US$6.33 billion) last month, compared with a monthly expansion of 10 trillion won in April, according to the data by the Financial Services Commission (FSC).

In the first five months of this year, household loans grew by 27.4 trillion won, compared with a growth of 32.5 trillion won for the same period last year. 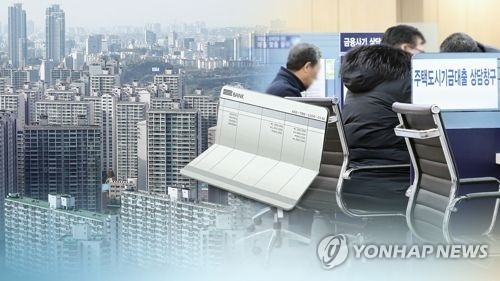 A tighter lending rule was adopted at commercial banks in March to better assess a borrower's repayment ability and reduces the risk of default.

The stricter lending calculation for home mortgages, named the Debt Service Ratio (DSR) by the financial authorities, uses a new system that measures all debt principal and interest payments as a proportion of annual income.

Savings banks and other financial institutions will soon adopt the tighter lending rule.

South Korea's outstanding household debt jumped to a record 1,468 trillion won (US$1.36 trillion) in the January-March period, up 8 percent from a year earlier, according to preliminary data from the Bank of Korea.
(END)

Growth of household loans slow in May

Growth of household loans slow in May