"I guess the attention of all our people must currently be directed toward Singapore," he added, after watching the live broadcast of the opening of the meeting between U.S. President Donald Trump and North Korean leader Kim Jong-un in the Southeast Asian nation.

Moon and other Cabinet members delayed their weekly meeting for more than 10 minutes to watch the opening of the unprecedented U.S.-North Korea summit. 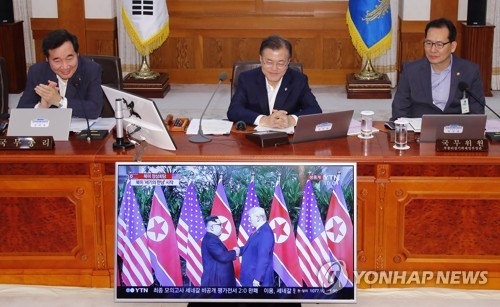 "I too spent a sleepless night. I, along with all our people, sincerely hope that it will be a successful summit that will open a new era of complete denuclearization, peace and a new relationship between South Korea, North Korea and the United States," Moon said, according to Cheong Wa Dae pool reports.

At the start of his historic meeting with Kim, the U.S. president said the meeting will be a "tremendous" success.

Moon, however, has said the success of the U.S.-North Korea summit will only be the start of what he called a "long process" to completely denuclearize the North and establish lasting peace on the Korean Peninsula.

"The deep-rooted hostile relationship and the North Korean nuclear issue cannot be resolved in one single action in a meeting between leaders," Moon said Monday while meeting with his top aides. "Even after the two leaders open the dialogue, we will need a long process that may take one year, two years or even longer to completely resolve the issues."

Moon has expressed his hope of holding a three-way summit with Trump and Kim in the near future to formally end the Korean War.

Seoul and Pyongyang technically remain at war as the 1950-53 war ended only with an armistice, not a peace treaty.

Moon has held two bilateral summits with the North Korean leader, and the two are again expected to meet in Pyongyang before the end of the year.