SEOUL, June 12 (Yonhap) -- South Korea's household lending by local banks quickened at the fastest pace in six months in May from a month earlier on a gain in mortgage loans, central bank data showed Tuesday.

Outstanding household loans from banks came to 786.8 trillion won (US$732.1 billion) as of the end of May, up 5.3 trillion won from the previous month, according to the data from the Bank of Korea.

Meanwhile, non-mortgage loans, including lending through overdraft lines of credit, gained 2.5 trillion won on-month to 204.6 trillion won in May, falling slightly from a 2.7 percent on-month expansion tallied in the previous month.

The BOK explained that a growing number of people needed money for paying the remainder of the debt they incurred to buy property before moving into new homes in the spring season.

The South Korean government has churned out a series of measures to tighten mortgage rules for owners of multiple homes as part of efforts to ensure mounting household debt does not hurt the nation's economy. 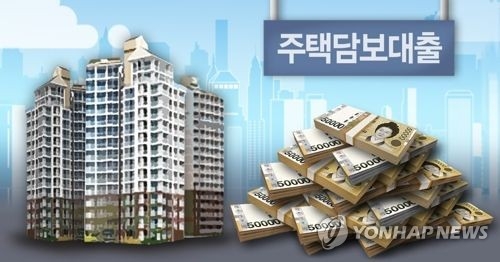 S. Korea's household lending by banks gains ground in May

S. Korea's household lending by banks gains ground in May