SEOUL, June 12 (Yonhap) -- South Korea was buzzing with talk of the historic meeting between U.S. President Donald Trump and North Korean leader Kim Jong-un on Tuesday, with all major TV stations showing live images from Singapore and citizens voicing hope for peace or misgivings about the communist nation.

The Trump-Kim meeting also overshadowed the nationwide local elections just one day away amid views it will serve as a big boon for the ruling party of President Moon Jae-in credited with successfully brokering the first-ever meeting of the leaders of the United States and the North.

TV stations streamed live footage, such as Trump and Kim arriving at the venue on Singapore's island of Sentosa, exchanging their historic first handshake and making brief opening remarks to reporters. Those scenes were replayed over and over again.

People were riveted as they watched the captivating scenes on TVs at public places like train stations.

The evening newspaper Munhwa Ilbo carried a huge photo of a smiling Kim shaking hands with Trump in front of their national flags on its front page, with the headline: "Handshake of the century: From hostilities to peace. New history begins."

Earlier, morning newspapers splashed wide front-page headlines about what they call a "fateful day," a "meeting of the century" and a "first step toward peace." Internet portal sites were also full of stories about the summit.

"I never imagined I would be able to see Chairman Kim and President Trump being in the same place," a 31-year-old office worker said while watching TV.

The meeting was unthinkable even just six months ago.

Before the North launched a charm offensive with leader Kim's New Year's Day address, the communist nation spent many years accelerating its nuclear and long-range missile programs, conducting a number of test launches and explosions that drove the situation to the brink of war.

The meeting had been briefly thrown into doubt last month.

The 180-degree change in the situation moved many South Koreans.

"They're not my presidents, but I got emotional and even felt proud," another Internet user identified by ID rand*** said. "I don't want to hate Kim Jong-un, and I'm even grateful to Trump. Please give us peace and economic exchanges." 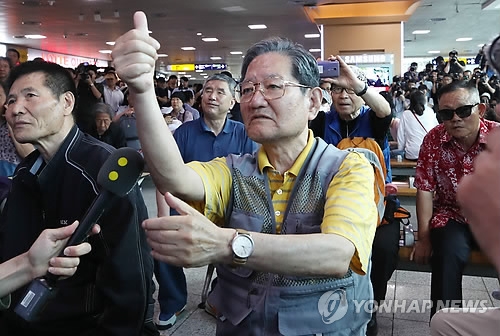 "This is the starting point for the two countries, which have been enemies for the past 70 years, to begin reconciliation," said Park Jung-eun, secretary general of the People's Solidarity for Participatory Democracy, one of the leading civic groups in South Korea.

"This will be a historic day leading to the end of the Korean War," she said.

Park said that even if the meeting doesn't produce big outcomes, it will still be meaningful as a good starting point for reconciliation.

Cho Sung-hoon, an official of the Citizens' Coalition for Economic Justice, said he was pleased to see the meeting taking place after it was almost canceled last month.

In the runup to the summit, the North stepped up criticism of the U.S. in an apparent attempt to increase its negotiating leverage. Trump struck back by calling the planned meeting off altogether in a surprising move that took Pyongyang completely off guard.

Trump's tactic worked as the North immediately asked for the summit to go ahead as scheduled.

"There will be differences in position on denuclearization between the two leaders, and I don't think results will come quickly," Cho said. "I hope this will serve as a starting point for the two countries to restore trust and declare an end to the war and move toward a peace treaty."

The conservative civic group Citizens United for Better Society stressed the importance of realizing the goal of complete, verifiable and irreversible denuclearization (CVID) of the communist nation.

"What's important is whether the North will commit to CVID," said Lee Ok-nam, an official of the group.

Conservatives also expressed skepticism about whether the North will ever give up its nuclear weapons.

"I hope for genuine peace, but I don't beg North Korea for peace," an Internet user identified by ID ic20**** said in a comment on a news story. "Kim Jong-un's agreement to meet Trump means he's having a hard time (from sanctions). But we're giving him a chance to survive again after we did so with Kim Jong-il."
(END)