Kim is taking his 25-man team to a 12-day training camp in Jakarta, Indonesia, the venue for the Aug. 18-Sept. 2 Asian Games. The quadrennial competition is open to players under 23, with each team allowed to carry up to three overage players as wild cards. Kim will have to whittle down his roster to 20, and he said the upcoming camp will help him determine who will survive the cuts.

"During this training camp, I plan to stress the value of sacrifice and helping each other out," Kim told reporters at Incheon International Airport. "Without sacrifices and help, you can't overcome difficult situations. Our team's motto is 'Fight for Your Teammates.'"

Kim added that the goal of this camp, during which South Korea will face the Indonesian U-23 national team and pro clubs, is to get Asian Games hopefuls acclimated to the humid conditions of Indonesia. 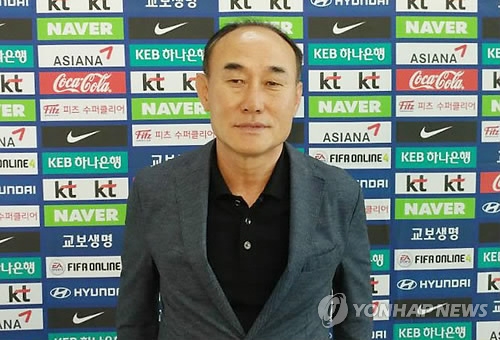 "This year's Asian Games will be played in brutal conditions that our players haven't experienced before," the coach said. "We'll have to play up to seven matches in 17 days (should South Korea reach the gold medal match), and we decided to train in Jakarta so that our players could get used to the climate there."

Kim said his players will have to improve their conditioning, and he will also run drills to tighten things up on the defensive end.

"I'll use both back-three and back-four systems on defense," Kim added. "But it will be an aggressive back-three. Overall, I'll try to get the guys to play an attacking brand of football."

South Korea defeated North Korea to win gold at the 2014 Asian Games and will try to win back-to-back gold medals for the first time.

But as much as the team's status as the hunted, trying to earn exemption from the mandatory military service by winning gold will weigh heavily on the minds of his young players, Kim said.

Healthy South Korean men must serve about two years in the armed forces, but the conscription is waived for athletes who bring home an Asian Games gold medal. They'll only have to undergo four weeks of basic military training, which would set them on a path to uninterrupted and, in some cases, lucrative professional careers.

"With the military service exemption at stake, there is obviously a great deal of pressure on these players," Kim said. "But if you have so much psychological burden, you can't play well. We just have to shake off that pressure."

Of Kim's three wild cards, one will almost certainly go to Tottenham Hotspur star Son Heung-min, the country's most gifted scorer today at 25. And as for the two remaining spots, Kim said the upcoming camp will help make the picture clearer.