SINGAPORE, June 12 (Yonhap) -- Beef ribs and soy-braised cod were among the dishes served to U.S. President Donald Trump and North Korean leader Kim Jong-un during a working lunch at their summit in Singapore on Tuesday.

Drawing keen attention was whether hamburgers would be on the table because of Trump's remarks during the 2016 presidential election campaign that if Kim visited the United States they would eat "a hamburger on a conference table" instead of a costly state dinner. But hamburgers were not on the menu released by the White House. 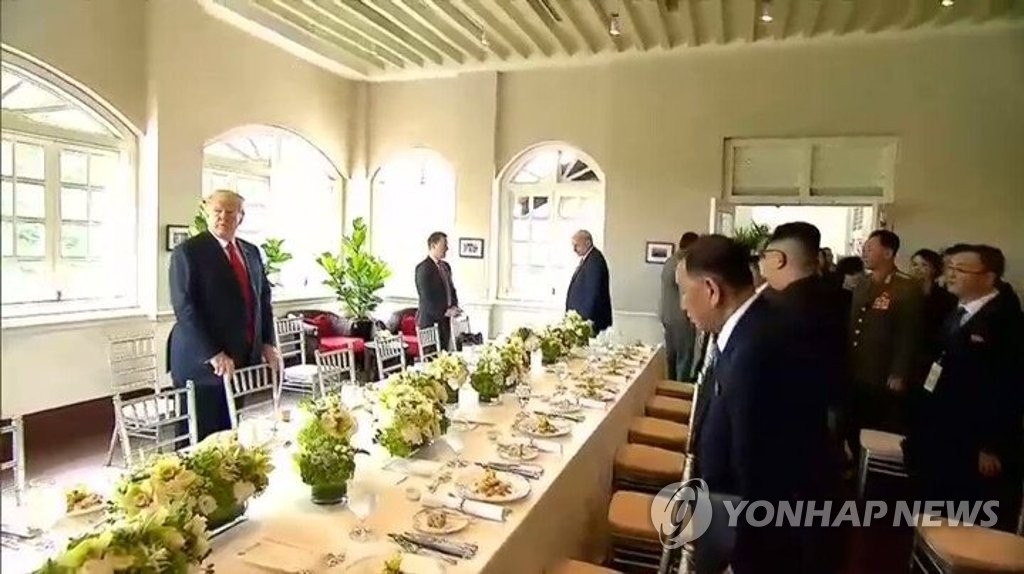 The menu, a blend of Asian and Western flavors, appears to be intended to symbolize the historic significance of the summit for reconciliation and exchanges between the two countries.

For the main course, they were served beef short-rib confit, a combination of sweet and sour crispy pork with fried rice, and a popular Korean dish "daegu jorim," or soy-braised cod with radish and Asian vegetables.

For dessert, they had the choice of dark chocolate tartlet ganache, Haagen-Dazs vanilla ice cream with cherry coulis and tropezienne.

The working lunch was joined on the U.S. side by Secretary of State Mike Pompeo, Chief of Staff John Kelly and National Security Advisor John Bolton, Ambassador Sung Kim, who has led substantive talks with the North going into the summit, and Matt Pottinger, senior director for Asia on the White House National Security Council.

(US-NK summit) A blend of Asian, Western dishes on menu at summit lunch

(US-NK summit) A blend of Asian, Western dishes on menu at summit lunch