Trump declared that he and Kim have formed a "very special bond," painting a positive outlook for the future of the relationship between Washington and Pyongynag.

The signing came after the two leaders' historic summit on the Singaporean resort island of Sentosa.

"The whole relationship with North Korea is going to be much different situation than it has in the past," Trump told reporters after the signing.

Trump said that the denuclearization process will begin very quickly and expressed his willingness to meet Kim again -- even at the White House.

He stopped short of revealing the details of the document, saying he would brief the media later in the day.

Trump also said Kim is "very smart" and a "very worthy, very hard negotiator." He added he will "absolutely" invite Kim to the White House.

The summit followed after weeks of grueling negotiations over sensitive issues such as the sequence and pace of the North's nuclear disarmament.

Washington has hammered away at its longstanding demand for the complete, verifiable and irreversible dismantlement of the North's nukes, while Pyongyang has favored an incremental process, long criticized as a strategy to wring out more economic benefits.

The unprecedented summit is a major milestone in the checkered history of the two countries' relations, which have been marked by distrust and military hostility. 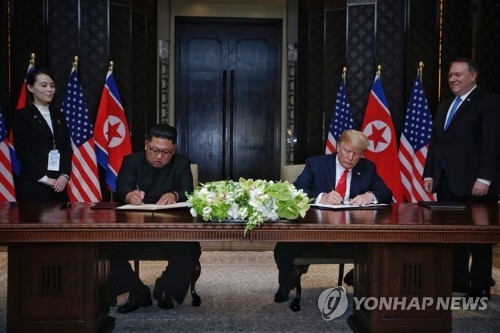