After opening slightly higher, the KOSPI experienced choppy trading throughout the session, fluctuating between positive and negative terrain before ending a tad lower.

Analysts said investors appear to have moved to lock in profits from recent gains, while closely monitoring the developments at the historic showdown between Trump and Kim, which started at 10 a.m. (Seoul time) on Sentosa in Singapore.

After holding rounds of talks, the leaders signed an agreement and expressed satisfaction over the pact. Details are to be made known during a press conference that will begin at around 5 p.m.

"Hopes and optimism over the summit have already been reflected in the index over the past several sessions, and investors will need some time to analyze the effects of the latest deal," said Choi Chang-gyu, an analyst at NH Investment & Securities.

"As other key market-moving events are planned this week, such a wait-and-see posture will continue for the time being," said another NH expert, Kim Byung-yeon.

On Wednesday, the U.S. central bank will hold a two-day policy meeting, during which it is widely expected to raise interest rates by a quarter of a percentage point from the current range of 1.5 percent to 1.75 percent.

Offshore investors and retailers dumped local shares worth 122.7 billion won and 12.1 billion won, respectively, dragging down the index, while institutions picked up 121.6 billion won worth of local equities, respectively.

Steel and construction, which had seen bullish trade on the back of heightened hopes for inter-Korean economic cooperation projects, drifted lower.

The South Korean currency closed at 1,077.15 won against the U.S. dollar, down 1.95 won from the previous session's close. The market will be closed Wednesday for local elections.

Bond prices, which move inversely to yields, ended on a mixed note. The yield on three-year Treasurys remained unchanged at 2.223 percent, and the return on benchmark five-year government bonds shed 0.2 basis points to 2.497 percent. 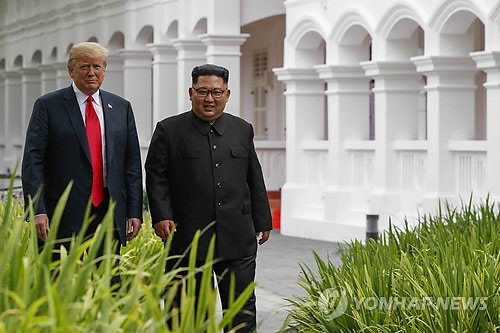