SEOUL, June 12 (Yonhap) -- Two members of South Korea's rate-setting panel said it has to seek the best timing for a rate rise in coming months so as to reduce the financial costs caused by a yearslong trend of low rates, according to minutes from the monetary meeting released Tuesday.

At its regular board meeting on May 24, the Bank of Korea (BOK) decided to freeze the base rate at 1.50 percent after the rate was raised from 1.25 percent in November last year.

The central bank said the decision was unanimously agreed upon by the seven members of the board, although details from the closed-door meeting showed that two board members raised the matter of monetary policy tightening.

"The economy is expected to continue its upside growth pace this year and inflation will likely reach the target, but financial stability is put at risk. At this moment, therefore, monetary policy has to focus on maintaining financial soundness," one of the two anonymous members was quoted as saying. "It is necessary for the central bank to make its monetary policy less accommodative."

In the longer term, the BOK has to raise the rate to a proper level in times of economic growth to secure wider policy room to deal with future business cycles, he added.

Despite a 0.25 percentage point increase in November, the central bank has said that its monetary policy remains accommodative to lend support to ongoing economic recovery efforts.

Also, low inflation pressure has made it more difficult for the BOK to raise the key rate. South Korea's consumer prices have been hovering around 1.5 percent for months, far below the target inflation of 2 percent.

"(The low interest rate trend) has caused inefficient allocation of resources and high social costs," said another member. "It is the right time to reduce the level of easing to some extent."

Other dovish members, meanwhile, said they had to be more cautious in making a change as there are lingering uncertainties at home and abroad and inflation remains low.

Some experts have said that the BOK might raise the rate at its next rate-deciding meeting slated for July 12, a month after the U.S. Fed's June meeting.

Currently, South Korea's base rate is slightly lower than that of the U.S. for the first time in more than 10 years following a rate rise by the Federal Reserve in March. The Fed will likely raise its rate again in June.

Many are worried that the rate imbalance between South Korea and the U.S. could lead to an outflow of foreign capital, which accounts for over 30 percent of stock holdings in Asia's fourth-largest economy. 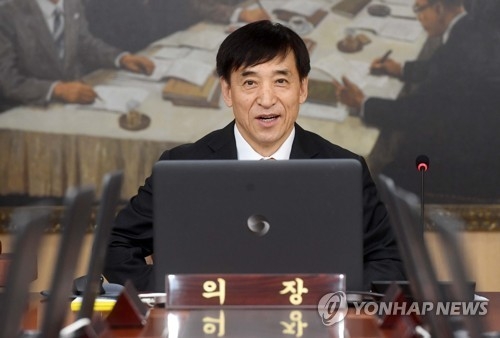