SEOUL, June 12 (Yonhap) -- China welcomed the outcome of the North Korea-United States summit held in Singapore on Tuesday, saying the leaders' joint declaration marked a milestone in bringing peace to the Korean Peninsula.

"The international community has paid attention to the North Korea-U.S. summit in Singapore. As Foreign Minister Wang Yi said, it is very important and positively meaningful that the leaders of the two countries held dialogue on an equal footing," Geng said during a regular press briefing.

"New history has been made, and China welcomes and supports it. This is also a goal that contains China's expectations and efforts."

Speaking to Russia's TASS, Deputy Foreign Minister Sergei Ryabkov said he "welcomes the fact that an important step forward has been made" concerning the meeting between Trump and Kim.

The European Union also released a statement supporting the efforts made by Pyongyang and Washington.

"Today's summit meeting between the President of the United States of America and the leader of the Democratic People's Republic of Korea reaffirms our strong conviction that diplomacy is the only way forward towards lasting peace on the Korean Peninsula," the EU said in the statement.

The EU described the meeting as a "crucial and necessary step" for peace, also praising South Korean President Moon Jae-in for the latest positive development on the Korean Peninsula.

"The ultimate goal, shared by the entire international community and as expressed by the United Nations Security Council, remains the complete, verifiable and irreversible denuclearization of the Korean Peninsula," it added.

The EU added it is willing to support other follow-up measures to bring "long-lasting peace" on the Korean Peninsula. 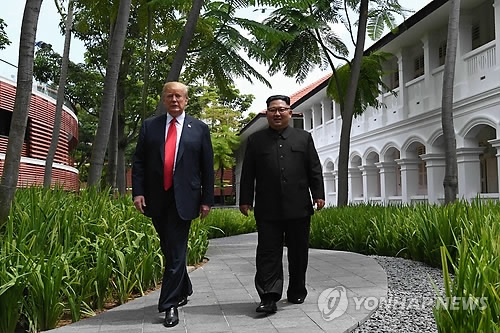