SEOUL, June 12 (Yonhap) -- German star countertenor Andreas Scholl, known for his luminous female-range voice, said Tuesday that countertenor has the quality of liberating him and his listeners from prejudice about male and female voices.

The 50-year-old classical singer is one of the world's most popular countertenors, a male voice in the high-pitch voice range of the modern-day female soprano. It was in wide use in the 17th-century Baroque period when women were rarely given a role onstage and has come again to popularity since the 1970s and 1980s as the global classical world rediscovered the Baroque period.

"When the countertenor voices first appeared in the 1970s and 1980s, some people had a prejudice about men singing in women's voice, and I faced the prejudice onstage myself," the 50-year-old Scholl said in a press conference in Seoul ahead of his concerts later this week.

For Scholl, however, singing in countertenor is a way of expressing himself regardless of the bias toward what should be male or female voices.

"It could get you out of other people's opinions, thus giving you a sense of liberation from prejudice against men and women," the singer noted.

"When I sing, I don't think I am singing in a woman's voice," he said. "This is possible because of my belief and training that my emotion and passion can be effectively expressed in countertenor."

"It was not very visible at first, but countertenor has grown into the ranks of other vocal ranges like soprano, alto and bass, having proved that it too can command various skills, perfect technique and dramatic performance," according to Scholl. 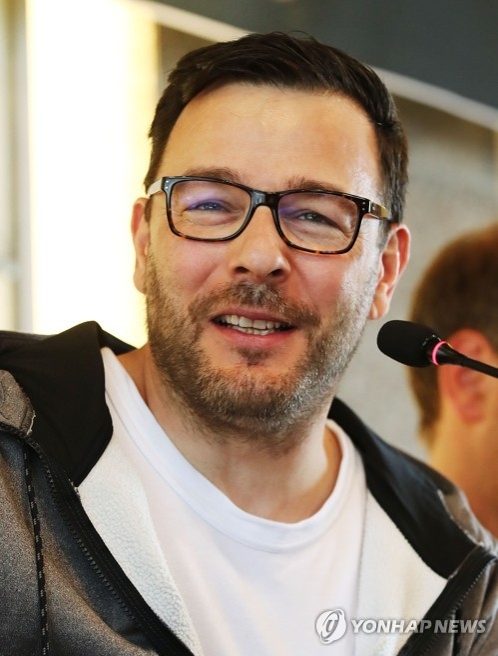 During his career in classical music, Scholl has also been active in composing and producing popular music, with his 1995 song "White as Lilies" going viral in South Korea after it was used in a local TV commercial.

"I composed an electric music version of 'White as Lilies.' I plan to edit the video clips to match the song and upload it (online) sometime tomorrow," he said.

Starting on Thursday, Scholl is scheduled to stage three days of concert in Cheonan, some 80 kilometers south of Seoul, and in Seoul as part of Hanwha Classic 2018, an annual classical music event hosted by the Hanwha Group.

The program predominantly features works of Handel, as well as works of Vivaldi and Purcell.