"I think it is very provocative ... You have a country that is right next door," he added, referring to the communist state. 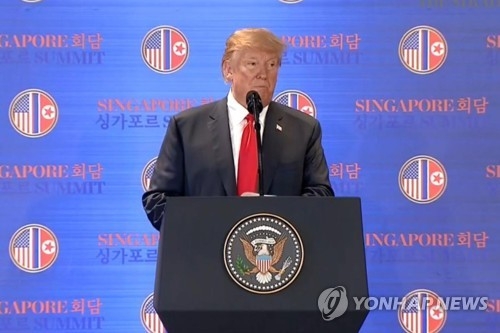 Amid the growing mood for reconciliation, the possibility has emerged that Seoul and Washington could consider scaling back the regular annual drills, including the summertime Ulchi Freedom Guardian (UFG).

The allied exercises are based on joint contingency plans that outline a series of procedures to handle a wide range of scenarios, such as a full-blown war triggered by the North's attacks.

In 1992, Seoul and Washington canceled their "Team Spirit" exercise amid dialogue with the North, which resumed the following year.

The U.S. Forces Korea (USFK) said later that it has received no updated guidance on the execution or cessation of training exercises, including the UFG slated for August.

"In coordination with our ROK (South Korean) partners, we will continue with our current military posture until we receive updated guidance from the Department of Defense and/or Indo-Pacific Command," the USFK said in a statement.

The ICBM has been a grave concern for the U.S., as the North was seen using the missile capability to keep American forces at bay and undercut the credibility of the U.S.' security commitment to its Asian allies.

Following the unprecedented summit, Trump and Kim signed a joint statement in which they agreed to craft "new" bilateral relations and make joint efforts to build a "lasting and stable" peace regime on the peninsula.

Trump and Kim arrived in Singapore on Sunday and are set to leave later on Tuesday.