(ATTN: UPDATES with analyst's quote and other details)
By Kim Kwang-tae

SEOUL, June 12 (Yonhap) -- The South Korean business community on Tuesday hailed the historic summit between the leaders of North Korea and the United States as it could offer new business opportunities for Asia's fourth-largest economy.

North Korean leader Kim Jong-un committed to the complete denuclearization of the Korean Peninsula at the summit with U.S. President Donald Trump in Singapore.

The two men also committed to establishing "new" bilateral relations and making joint efforts to build a "lasting and stable" peace regime on the Korean Peninsula.

So far, North Korea has been under tightened U.N. sanctions as well as U.S. sanctions for its nuclear and missile tests in recent years, a key hurdle that blocked outside investment in North Korea.

After the summit, Trump said Washington's relationship with Pyongyang will be "much different" from what it was, with Kim even predicting that "the world may see a major change" going forward. 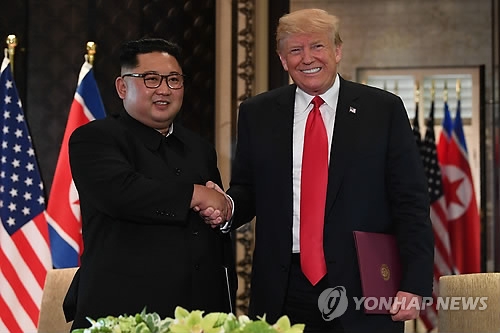 The agreement could eventually lead to the lifting of international sanctions on Pyongyang, which in turn could allow South Korean firms and those from other countries to make inroads into the closed nation with a population of some 25 million.

"We welcomed the summit between North Korea and the U.S., and we expect the summit could help revitalize the economies in the region through economic exchanges and cooperation," the Korea Employers Federation said in a statement.

The Korea Chamber of Commerce and Industry also said it will make thorough preparations for a new era of inter-Korean economic cooperation once conditions are ripe.

Hyundai Group -- which invested $1.25 billion in North Korea -- expressed hope that the summit would bring peace and reconciliation to the Korean Peninsula and pave the way for substantial inter-Korean economic cooperation.

Hyundai Asan, the inter-Korean business arm of Hyundai Group, had operated a joint tour program at Mount Kumgang, a scenic mountain resort on North Korea's east coast, that was pioneered by Chung Ju-yung, the late founder of Hyundai Group, in 1998.

South Korea halted the tour program in 2008 following the shooting death of a South Korean female tourist at the resort, stripping the North of a key source of much-needed hard currency.

Lotte Group, South Korea's fifth-largest conglomerate, whose businesses range from department stores to hotels and fast-food restaurants as well as beverage and confectionery units, vowed to actively cooperate with the South Korean government engagement policy toward its northern neighbor.

Lotte has decided to create a task force to explore business opportunities in North Korea and places like China and Russia that could affect the reclusive country as well.

In April, South Korean President Moon Jae-in and North Korea's Kim held talks at the border village of Panmunjom and reached an agreement on a wide range of measures to ease tensions and boost ties, including complete denuclearization of the Korean Peninsula.

"This international green light, plus consolidated domestic support, will accelerate Seoul's engagement of Pyongyang. Beyond sports and cultural diplomacy, further economic cooperation can be expected," said Leif-Eric Easley, a professor of international studies at Ewha University in Seoul.

South Korea pulled the plug on the sprawling factory park in North Korea's western border city of Kaesong in February 2016 to punish North Korea for its fourth nuclear test and a long-range rocket launch.

Still, the Trump-Kim summit provided grounds for new optimism among South Korean businessmen who had operated factories in Kaesong as it brightened the prospect of reviving their factories.

"We hope that we can go to the Kaesong Industrial Complex within this year," said Shin Han-yong, head of a private task force that speaks for all 123 South Korean firms that had operated factories in Kaesong.

An official of Yuhan-Kimberly Ltd. was also upbeat on the possible opening of North Korea, saying it means a new market for the maker of sanitary products.

The company plans to initially focus on a forestation project in the country, which has suffered severe deforestation for decades, if the two Koreas resume economic projects.

"If Trump Tower in Pyongyang is something more than just a theory, then many other surprising things will happen that defy our expectations," Lee said.