They agreed to make joint efforts to build a "lasting and stable peace regime" on the peninsula, according to a four-point joint statement that sums up the outcome of their Singapore talks, which are said to be comparable to the 1972 meeting between Richard Nixon and Mao Zedong.

But it made no mention of a timetable or detailed methods. There's even no word on formally ending the 1950-53 Korean War, largely a political move to help pave the way for replacing the armistice agreement with a peace treaty. 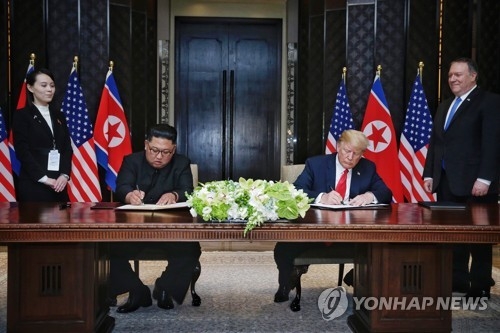 For Pyongyang, formally ending the war is significant for its ambition to normalize diplomatic ties with Washington. Kim might have expected a deal on that, at least a schedule, as his regime has taken some goodwill steps including the release of three American detainees and the removal of its nuclear test site.

"KOREAN WAR TO END!”Trump tweeted in late April in the wake of an inter-Korean summit at Panmunjom, a truce village at the Demilitarized Zone (DMZ) that divides the two Koreas.

Emerging from a sit-down with Kim's special envoy at the White House earlier this month, Trump also said publicly that the matter was discussed.

Apparently, however, Trump was not prepared yet to present the gift out of his pocket. He wouldn't rush to use the card.

He seemed to have instead focused on building personal trust with the North's leader half his age with a scheme to test his sincerity a little bit more.

He said they would meet each other again, "many times."

The summit deal calls for Secretary of State Mike Pompeo to have follow-up discussions with an unspecified senior North Korean official "at the earliest possible date."

It remains uncertain whether they will be able to produce a concrete plan to declare a formal end to the conflict.

Speaking at a press conference later Tuesday, Trump again raised hope that the war will finish "soon." He did not elaborate. 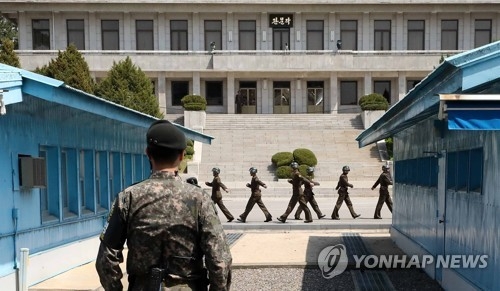 South Korea has stressed the importance of putting an end to the war politically and internationally, which is regarded as a starting point for a full-scale peace mechanism.

President Moon Jae-in wants to hold a joint ceremony with Trump and the North's leader at Panmunjom.

During their April 27 meeting, Moon and Kim noted that this year marks the 65th anniversary of the cease-fire. They agreed to push for trilateral meetings involving the U.S. or a four-way session also joined by China with a view to declaring an end to the war, signing a peace treaty and establishing a permanent peace regime.

If it's agreed on, a potential date is July 27, the armistice anniversary.