SEOUL, June 12 (Yonhap) -- The summit between U.S. President Donald Trump and North Korean leader Kim Jong-un and the joint statement that followed fell short of mentioning details about Pyongyang's nuclear weapons program, causing some analysts here to predict the event will have a limited impact on the financial market.

After the first-ever meeting between a sitting U.S. president and North Korean leader, Trump and Kim agreed to work toward complete denuclearization of the Korean Peninsula. In return, the United States committed to offer security guarantees for North Korea.

Such a step could potentially lead to the easing of tensions that have adversely weighed down South Korea's market in the past.

However, the joint statement did not give any specifics on how denuclearization will be realized and made no mention of a peace treaty that could officially end the 1950-53 Korean War.

Also, there was no reference to "complete, verifiable, irreversible dismantlement (CVID)" of North Korea's nuclear program in the statement, which some experts have said would be the hallmark of setting any agreement different from previous "vague" deals that Pyongyang reneged on in the past. 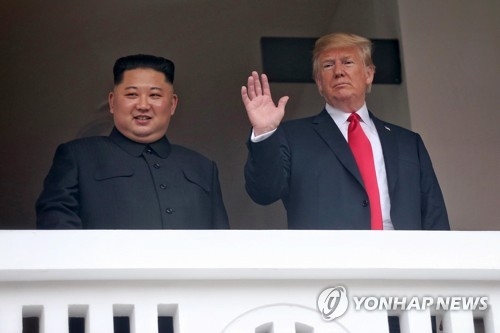 Market watchers said the joint statement was in line with general expectations going into the talks that could be deemed as "neutral" in terms of bringing about changes.

Kong Dong-rak, an economist at Daishin Securities, told Yonhap Infomax, the financial news arm of Yonhap News Agency, that the absence of a CVID reference could stir controversy, but North Korea's Kim did show his willingness to denuclearize.

This, he said, can be deemed a positive step for the market.

As the process of denuclearization is expected to be gradual, Kong said he was pretty sure the summit is unlikely to have any meaningful and immediate impact on the market in South Korea.

South Korea's stock market was actually muted on Tuesday, with the benchmark Korean Stock Price Index (KOSPI) falling 1.32 points, or 0.05 percent, to finish at 2,468.83. This was even after Trump hinted strongly that the meeting was very constructive.

Others said that the U.S. chief executive was clear on sanctions being kept in place for now until North Korea makes clear progress to follow through on its denuclearization pledge.

Shin Dong-soo, an analyst at Eugene Investment & Securities, pointed out that, with sanctions against North Korea to be lifted only after a verification process, the meeting's significance will be naturally lessened.

"Except for a short-term psychological impact, (the summit) is unlikely to really rock the markets here," Shin claimed.

Despite a lack of details on North Korea's denuclearization, the U.S. and North Korea did agree to make "efforts to build a lasting and stable peace regime on the Korean Peninsula," which can be seen as a step in the right direction, the expert said.

Yoon Yeo-sam, an analyst at Meritz Securities, called the outcome of the summit "positive," saying it would increase appetite for risky assets.

Such a development, while nothing revolutionary, is nevertheless better than heightened tensions caused by a standoff and threats of war, other analysts here pointed out.

Bond prices, which move inversely to yields, ended on a mixed note on Tuesday. The yield on three-year Treasurys remained unchanged at 2.223 percent, and the return on benchmark five-year government bonds shed 0.2 basis points to 2.497 percent.