SEOUL, June 12 (Yonhap) -- South Korean President Moon Jae-in hailed the outcome of the summit between his U.S. and North Korean counterparts Tuesday, calling it a historic event that will end what he called the last remaining conflict of the Cold War and write a new history of peace and cooperation on the Korean Peninsula.

"I offer my heartfelt congratulations and welcome the success of the historic North Korea-United States summit," Moon said in a statement read by Cheong Wa Dae spokesman Kim Eui-kyeom on his behalf. 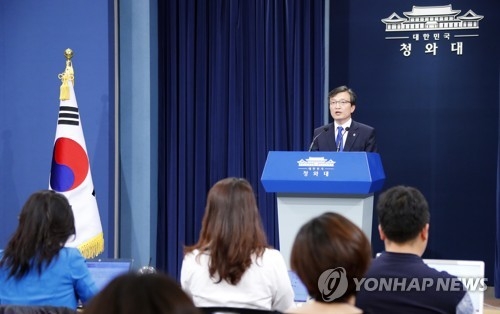 In the meeting, Kim reaffirmed his commitment to complete denuclearization of the Korean Peninsula, while Trump agreed to improve the countries' bilateral relationship, according to a joint statement released shortly after their summit.

The South Korean leader said he could expect a successful outcome of the U.S.-North Korea summit after his two recent encounters with Kim at summits on April 27 and May 26 and his latest telephone conversation with his U.S. counterpart, held just the day before the Trump-Kim meeting.

However, 70 years of confrontation between the countries had cast a dark shadow over his eyes to make him doubt what was actually taking place, he said.

"I pay my high compliments for the courage and determination of the two leaders, President Trump and Chairman Kim, not to settle for that outdated and familiar reality but to take a daring step towards change," he said. "The June 12 Sentosa Agreement will be recorded as a historic event that has helped break down the last remaining Cold War legacy on earth."

Moon said the agreement marked a great victory for all people who long for peace.

"Building upon the agreement reached today, we will take a new path going forward. Leaving dark days of war and conflict behind, we will write a new chapter of peace and cooperation. We will be there together with North Korea along the way," he said.

Still, it will be a long journey, he insisted.

"This is just a beginning, and there may be many difficulties ahead, but we will never go back to the past again and never give up on this bold journey," Moon said.

"History is a record of people who take action and rise to a challenge."

"My administration will spare no effort in cooperating with the United States, North Korea and the international community to ensure that the agreement can be implemented in its entirety," he said.

"I, as President of the Republic of Korea, promise to make all-out efforts to help establish permanent peace on the Korean Peninsula and usher in a new era of co-existence and prosperity."

In his press conference following the U.S.-North Korea summit, Trump said future negotiations with North Korea may involve South Korea and its president, while also noting a peace treaty with Pyongyang will require the participation of Seoul and Beijing.

He said he planned to hold a telephone conversation with Moon, apparently to explain the outcome of his meeting with Kim.

Cheong Wa Dae officials have said U.S. Secretary of State Mike Pompeo is scheduled to visit South Korea this week to personally explain the outcome of the U.S.-North Korea summit.