SINGAPORE, June 12 (Yonhap) -- The U.S. Forces Korea (USFK) said Tuesday that it had received "no updated guidance" yet related to the regular exercises with South Korea that President Donald Trump said he will stop.

"The USFK has received no updated guidance on execution or cessation of training exercises -- to include this fall's scheduled Ulchi Freedom Guardian," it said in response to a question from Yonhap News Agency.

"In coordination with our ROK (South Korean) partners, we will continue with our current military posture until we receive updated guidance from the Department of Defense (DoD) and/or Indo-Pacific Command (INDOPACOM)," it added.

Following his summit with North Korean leader Kim Jong-un, Trump said at a press conference that he will stop "war games" with the South, calling them "provocative and expensive."

The USFK also said it has yet to receive any direction on any potential change to troop levels.

"USFK has maintained a very steady level of troops on the Korean peninsula in recent years. Although the commonly cited figure is routinely between 28,000 and 29,000, the actual number can drop lower than that and/or swell to over 30,000 given presence of rotational units or training exercises," it said.

"In coordination with our ROK partners, USFK will continue to receive guidance from DoD and/or INDOPACOM on any potential changes to troop levels on the Korean peninsula," it added.

Amid the growing mood for a thaw in relations between the two Koreas and between the U.S. and the North, the talk of a reduction in the USFK has persisted.

Trump told the press that he wants to "bring them (U.S. troops) back home," but that the issue is "not part of the equation right now." 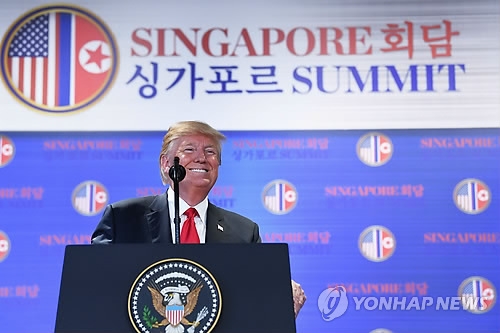