Speaking after historic talks with North Korean leader Kim Jong-un, Trump said Kim was "very firm" about his will to give up nukes and reaffirmed an "unwavering commitment" to the denuclearization of the Korean Peninsula. 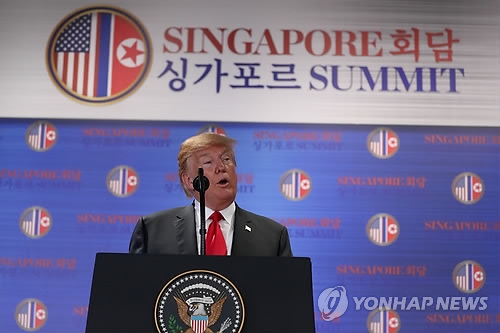 But there was no clear indication of when North Korea would begin the process except that it would be "very, very soon."

"Once you start the process, it means it's pretty much over. Can't use them," Trump told reporters at the Capella Hotel on Sentosa Island, where the summit had taken place hours earlier. "We will do it as fast as it can mechanically and physically be done."

Earlier the Trump administration pushed for immediate denuclearization in an effort to prevent the North from eking out concessions and rebuilding the nuclear program.

Trump said the two also talked about how they will verify the dismantlement, which was a key sticking point in past negotiations to halt the weapons development.

Asked if the inspectors will be American or experts from agencies, Trump said they would be a combination of the two.

And according to Trump, Kim verbally pledged to destroy a missile engine testing site, something that was not included in their joint statement.

"I think he might want to do this as much or even more than me because they see a very bright future for North Korea," he said in reference to the denuclearization commitment.