On their way out from a summit meeting room in the morning at the Capella Hotel on the Singaporean resort island of Sentosa, Trump and Kim walked down to the U.S. presidential limousine on standby and showed its interior to the North Korean leader.

The Associated Press reported that Trump made some gestures and one of his bodyguards leaped to open the door of the presidential bulletproof limousine on standby, and then he showed its interior to the North Korean leader. 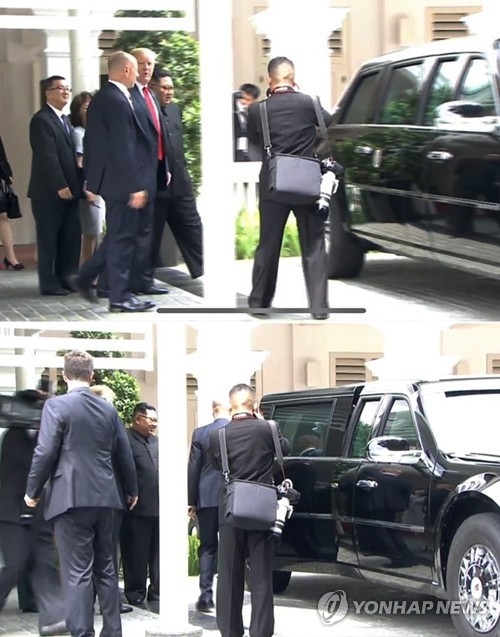 Kim briefly looked inside the limousine, also known as "The Beast" for its high-tech equipment and maximum safety features. It is not clear how Kim reacted to such an apparently off-the-cuff suggestion on the sidelines of their make-or-break summit.

A similar eye-catching moment took place later before going for a working launch.

CNN reported that Trump jokingly asked the press awaiting the two leaders to "take a good picture, everybody. So we look nice and handsome and thin."

Trump made the joke just a few hours before he and Kim signed their summit agreement in which they reaffirmed complete denuclearization of the Korean Peninsula and committed to establishing "new" bilateral relations.