SINGAPORE, June 12 (Yonhap) -- Tuesday's summit agreement between the United States and North Korea lacks specifics on Pyongyang's denuclearization but marks a meaningful start on an issue that used to be a nonstarter, analysts said.

After his historic meeting with U.S. President Donald Trump, North Korean leader Kim Jong-un committed to the "complete" denuclearization of the peninsula without specifying any timeline or method, which were key sticking points in the lead-up to the summit.

The agreement fell short of expectations that Trump, who recently withdrew the U.S. from the landmark nuclear deal with Iran, would nail down an agreement on a swift and stringent denuclearization.

However, such an agreement after the yearslong absence of disarmament talks -- either bilateral or six-way -- is a foretaste of what is to come: cooperation between the longtime foes in building trust and moving toward denuclearization, some observers said.

"I think that crafting such an agreement at their very first encounter is a meaningful outcome," Nam Chang-hee, security expert at Inha University, told Yonhap News Agency.

The U.S. push for CVID was seen as a key hurdle, as Pyongyang has taken it as a "mortifying" demand aimed at forcing its communist regime to "kneel down to the ground." CVID was a major point of contention in past negotiations as well.

"I believe that the expression, 'complete denuclearization,' should be seen as tantamount to CVID," said Koh Yoo-hwan, a professor of North Korean studies at Dongguk University.

"Pyongyang, as is widely known, has been strongly averse to that expression. The fact that such a declaratory expression is not included does not mean that denuclearization will not take place," he added.

During a press conference, Trump said the dismantlement of North Korea's nuclear weapons program will take place as soon as "mechanically, physically" possible, but refused to set a deadline.

Skeptics, however, pointed out that a failure to clearly define the meaning of "complete denuclearization" of the peninsula will give leeway for Pyongyang to loosen its commitment later on.

They have argued that the North's definition of denuclearization means the complete removal of any U.S. assets that could pose a nuclear threat to the North. The assets may include the U.S. nuclear umbrella for the South, which could possibly lead to a breakup of the decadeslong Washington-Seoul alliance. 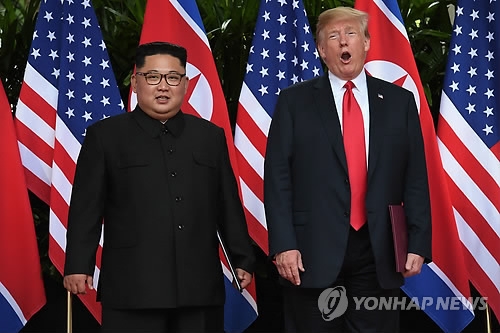