South Korea will use New Peterhof Hotel as their team residence and will train at Spartak Stadium in Lomonosov. 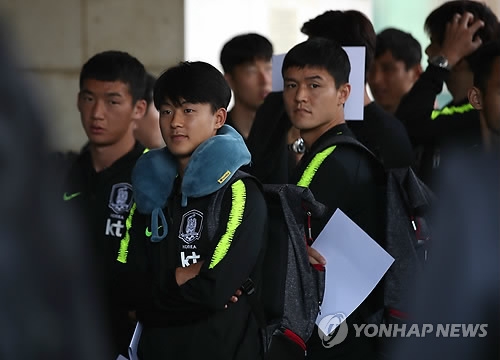 After arriving at the hotel, the national team received a warm welcome from some 150 South Koreans in St. Petersburg, including Woo Yoon-keun, the South Korean ambassador to Russia.

The South Korean supporters were wearing red shirts and showed banners that read "Pilseung Korea (Victory Korea)." The players went straight to the hotel after they got off a bus, but Shin and other coaching staff took a group photo with fans.

The official welcome ceremony for the national team was held inside the hotel later, with no media access. The ceremony was originally intended to be staged in front of the hotel, but due to security reasons, it was moved indoors.

The national team arrived in St. Petersburg after having a nine-day training in Austria, where they also played two friendly matches. South Korea posted a scoreless draw against Bolivia and suffered a 2-0 loss to Senegal.

The Taeguk Warriors will open their World Cup campaign against Sweden at Nizhny Novgorod Stadium in Nizhny Novgorod on June 18. South Korea will then face Mexico at Rostov Arena in Rostov-on-Don on June 23 and take on Germany four days later at Kazan Arena in Kazan. The national team will travel back-and-forth between St. Petersburg and their competition venues during the World Cup.

St. Petersburg is approximately 1,140 kilometers away from Nizhny Novgorod and 1,824 km away from Rostov-on-Don. It's also 1,540 km from Kazan. All three venues are about a two-hour flight from St. Petersburg. 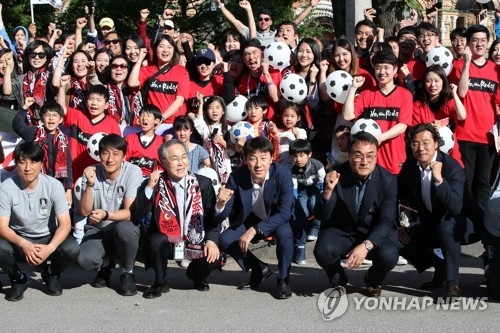 The Korea Football Association (KFA) has been preparing for the national team's comfortable stay in St. Petersburg. It already sent an advanced team to St. Petersburg on Sunday to check facilities and other details at New Peterhof Hotel.

South Korea's training ground at Spartak Stadium in Lomonosov is about a 20-minute drive from the hotel. South Koreans will use a team bus that displays the slogan "Tigers of Asia, Conquer the World," when they move to the training spot or airport. 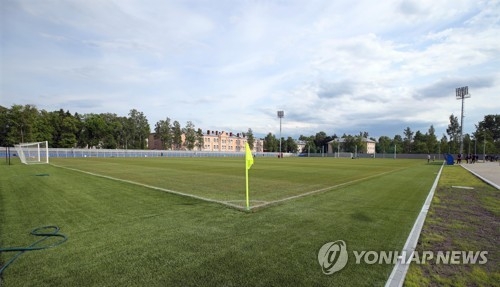 The Russian organizers said they refurbished the pitch conditions of Spartak Stadium in Lomonosov, which has been generally used for youth footballers.

South Koreans will try to make themselves fit for the match during their stay in St. Petersburg, but they have to deal with the city's tricky weather and white nights.

St. Petersburg is known for frequent rain showers, while the city never gets fully dark even after 10 p.m.

South Korea will be one of five teams that will stay in St. Petersburg during the World Cup. England, Costa Rica, Saudi Arabia and Croatia have also set up their base camps in St. Petersburg.

South Korea will have an open training session on Wednesday at Spartak Stadium in Lomonosov.