The Korean Central News Agency (KCNA) added that Trump expressed his intention to suspend all joint military drills between South Korea and the U.S. while talks are under way between Pyongyang and Washington.

Kim and Trump invited each other to their countries and they "gladly" accepted the invitations, sharing the belief that such a meeting would serve as "another important" occasion for improved relations between North Korea and the U.S, the KCNA said.

The report came a day after Kim and Trump held a historic summit in Singapore on Tuesday. The two signed a four-point joint statement.

"Kim Jong Un clarified the stand that if the U.S. side takes genuine measures for building trust in order to improve the DPRK-U.S. relationship, the DPRK, too, can continue to take additional good-will measures of next stage commensurate with them," the KCNA said. DPRK is the abbreviation for the North's formal name, the Democratic People's Republic of Korea.

"Kim Jong Un and Trump had the shared recognition to the effect that it is important to abide by the principle of step-by-step and simultaneous action in achieving peace, stability and denuclearization of the Korean Peninsula," it added.

The U.S. has demanded complete and speedy denuclearization of the North for fear that the subsequent verification process could be drawn out. The North has said that it wants a phased approach in dismantling its nuclear weapons program.

In the summit agreement, Kim and Trump affirmed their commitment to "complete" denuclearization, falling short of the U.S.'s longtime demand for a complete, verifiable and irreversible denuclearization of the North.

The report also said Kim underlined the importance of "bold decision on halting irritating and hostile military actions." He told Trump, according to the KCNA, North Korea and the U.S. should refrain from antagonizing with each other and take relevant "legal" and "institutional" actions on that matter. 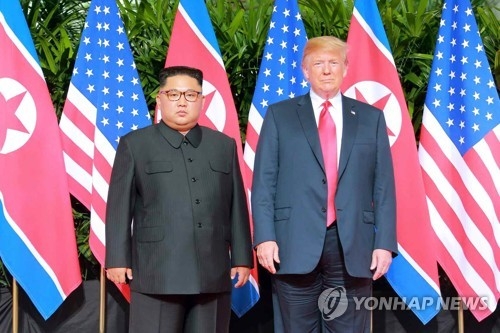 "Trump expressed his intention to halt the U.S.-south Korea joint military exercises, which the DPRK side regards as provocation, over a period of good-will dialogue between the DPRK and the U.S., offer security guarantees to the DPRK and lift sanctions against it along with advance in improving the mutual relationship through dialogue and negotiation," the KCNA reported.

It also mentioned that the two leaders agreed to recover the remains of American soldiers killed during the 1950-53 Korean War.

Kim emphasized the need to take "practical measures" to implement all the agreements discussed during his summit with Trump and promised in the joint statement "at an early date."

The North's state media provided detailed hour-by-hour reporting on the summit, including Kim's departure for the meeting venue, his remarks and the names of officials who accompanied him.

It said that Kim and Trump had a candid exchange of views and in-depth discussion on establishing "new" bilateral relations and building a permanent and durable peace mechanism on the Korean Peninsula.