SEOUL, June 13 (Yonhap) -- The historic summit between U.S. President Donald Trump and North Korean leader Kim Jong-un is unlikely to have an immediate impact on the South Korean stock market as it would take time to reduce risks from the North's nuclear weapons program, analysts said Wednesday.

If there is tangible progress on dismantling North Korea's nuclear program in the medium and long-term, however, the benchmark KOSPI index could reach 2,800 points or more later this year, according to a survey of seven stock analysts.

After about five hours of meetings in Singapore on Tuesday, Trump and Kim signed a joint statement committing to the "complete denuclearization of the Korean Peninsula." But the statement fell short of mentioning details of how the North's denuclearization would be achieved.

The analysts said the sparse statement has been in line with market expectations. 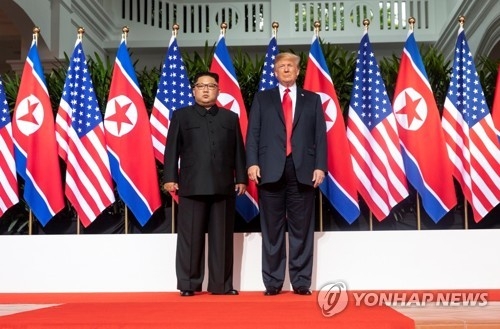 Seo Young-ho, head of the research division at KB Securities, said, "There is an assessment that the statement was short on details, but it would be difficult for the two sides to deal with details, given a short preparation period."

If North Korea and the U.S. comply with pledges in the joint statement, the analysts predicted that lower price-earnings ratios of South Korean stocks would significantly improve.

Geopolitical risks centering on North Korea, along with the opaque management structure of South Korea's family-run business conglomerate, have been cited as one of reasons for the lower value of South Korean stocks compared with foreign peers, a factor billed as the "Korea Discount."

Yoon Hee-do, chief researcher at Korea Investment & Securities, said, "There is a possibility that the Korean Discount would be resolved if geopolitical risks ease."

If so, Yoon expected the KOSPI index to reach 2,900 points by the end of this year.