SINGAPORE, June 13 (Yonhap) -- U.S. President Donald Trump's plan to stop "war games" with South Korea is stirring up heated debate, with supporters calling it a good-will gesture to facilitate North Korea's denuclearization and naysayers a blow to the bilateral alliance.

After his historic summit with North Korean leader Kim Jong-un on Tuesday, Trump said he will stop "provocative and expensive" exercises with the South, which Pyongyang has decried as a rehearsal of invasion. He told Fox News later that Washington will not be doing the exercises "as long as we are negotiating in good faith,"

Trump's remarks have caused consternation among security experts in Seoul and Washington, as they believe regular combined exercises are central to the decadeslong security alliance designed to counter threats from their common adversary, North Korea. 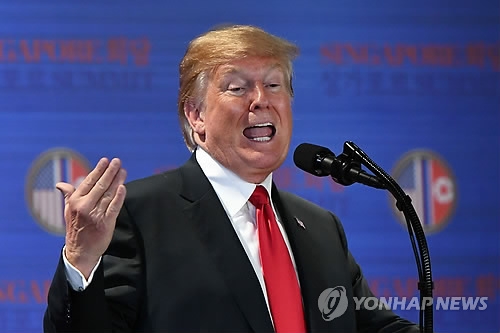 "Military drills have been key to the alliance. Through the drills, the allies have maintained preparedness against a possible invasion by the North or its possible missile attacks," said Nam Chang-hee, international politics professor at Inha University.

"I think there should be a clear understanding of how the South Korea-U.S. military defense system works. If the drills are suspended, many problems could occur in terms of the military operations just like the machines getting rusty when they are left unused," he added.

The professor, in addition, said that suspending the drills would be "unrealistic," while readjusting their frequency or downsizing them could be taken into consideration in line with the North's denuclearization process.

Retired Major Gen. Lee Seo-young, former defense attache of the South Korean Embassy in Washington D.C., said that the suspension, should it occur, could attenuate the alliance's overall deterrence capabilities.

"Basically, the most crucial mission of an alliance is to deter war or fight together should there be an invasion. How can we maintain combat readiness without training exercises?" said Lee.

"Should there be no exercises between the allies, the combined defense posture will weaken. With regard to this, there should be the active will from the government and the military (to keep the drills), as well as support from the citizens," he added.

Amid the growing mood for reconciliation, speculation has surfaced that Seoul and Washington could consider scaling back the regular annual drills, including the summertime Ulchi Freedom Guardian (UFG).

The allies' militaries have long defended the exercises as purely "defensive in nature," rejecting the North's persistent claim that the drills are aimed at making a nuclear foray into the North's territory.

The allied exercises are based on a series of joint contingency plans that delineate a series of procedures to handle a wide range of scenarios, such as a full-blown war triggered by the North's attacks or invasion.

Amid dialogue with the North in 1992, Seoul and Washington canceled their "Team Spirit" exercise, which resumed the following year.

Park Won-gon, security expert at Handong Global University, raised the possibility that Trump might have brought up the suspension issue, as it is a step that his administration can take on its own, while other decisions, such as normalizing relations with Pyongyang and using taxpayers' money for a large aid program, could require congressional backing.

Some experts said that the suspension of the drills could incentivize the North to denuclearize, as the communist state may welcome it as a substantive step by the U.S. to end the decades-long enmity toward each other.

"Trump appears to have indicated his pledge not to threaten the North with American nukes, which would provide the North with the rationale for its denuclearization," Koh Yu-hwan, a professor of North Korean studies at Dongguk University, said in a Singapore forum hosted by the Korea Press Foundation.

"On the other hand, Trump did not touch on the issue of (the reduction of) U.S. Forces Korea. Thus, this could be Trump's balanced diplomatic approach toward the two Koreas," the scholar added.

Kim Joon-hyung, North Korea expert at Handong Global University, said that Trump's suspension plan may focus on getting funds from the South for the U.S. military's deployment of strategic assets to the peninsula.

Japan, another Asian ally of the U.S., voiced concerns over Trump's plan to stop the South Korea-U.S. drills.

"Resolving nuclear, missile and abduction issues are our final aim," he said, adding, "We would like to ask North Korea to make policy changes in a visible way."

On Tuesday, U.S. Forces Korea told Yonhap that it had received "no updated guidance" yet on the execution or cessation of training exercises, including the UFG slated for August. 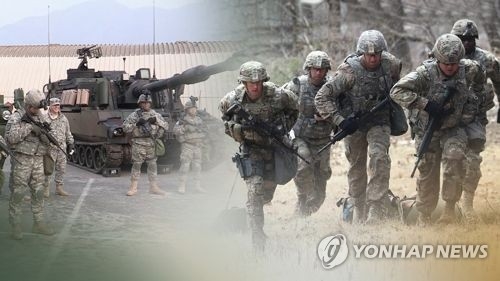