SEOUL, June 13 (Yonhap) -- The ruling Democratic Party (DP) is likely to clinch a landslide victory in Wednesday's local elections as it is almost certain to win at least 13 of the 17 big races, including those for Seoul mayor and Gyeonggi Province governor.

The DP will also likely win 10 of the 12 parliamentary seats in by-elections held simultaneously with local elections.

The results, if finalized, are expected to enhance President Moon Jae-in's mandate for liberal reforms and engagement with the North.

The main opposition Liberty Korea Party was headed toward a crushing defeat, as it is expected to win only two of the big mayoral and gubernatorial races.

Up for grabs in the local elections were 4,016 local administrative, legislative and educational posts, including 17 big-city mayoralties and provincial governorships.

An exit poll by three major TV broadcasters also showed that the DP will overwhelmingly win the elections, including the Seoul mayorship. 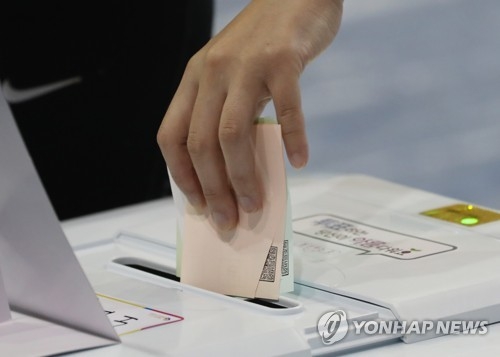 The quadrennial local elections were largely seen as a barometer for voter sentiment toward Moon, who took office in May last year.

The DP's big victory was widely anticipated, as the liberal party has basked in a high public approval rating aided by strong support for Moon and his drive for peace with North Korea.

The party also appeared to benefit from the mood for rapprochement that was created over a historic summit between the United States and North Korea in Singapore just a day earlier.

The DP expressed joy as its landslide victory has become certain.

"Today will be recorded as a day of victory for the people like last year's presidential election," Back Hye-ryun, a spokeswoman for the DP, said.

She added that Wednesday's elections reflected voters' aspirations for peace and prosperity and strong provincial governments. 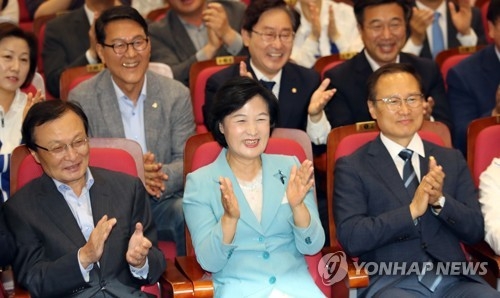 The biggest battleground was Seoul, where 20 percent of the country's population of 52 million live.

With 9.53 percent of the ballots counted, incumbent Mayor Park Won-soon, affiliated with the ruling DP, is certain to win the election with 58 percent of the vote, moving closer to his third term.

He competed against Kim Moon-soo of the conservative LKP and Ahn Cheol-soo of the minor opposition Bareunmirae Party.

Park called his election a great victory of Seoul citizens.

"I will make Seoul a city full of peace and prosperity ... The Seoul city government will back up the success of the Moon administration," he said.

Ballots counted also indicated the ruling party's candidates won in 12 other major cities and provinces -- including the cities of Incheon, Busan and Ulsan and the provinces of Gyeonggi. The LKP was ahead in only two of its strongholds -- the city of Daegu and North Gyeongsang Province.

But as for the South Gyeongsang governorship, the rival parties were in a neck-and-neck race as of 10:30 p.m.

Tentative turnout for the local elections was tallied at 60.2 percent, as 25.8 million of 42.9 million eligible voters cast ballots, according to the National Election Commission (NEC). It would mark the first time that the voting rate in a local election surpassed 60 percent since 1995. 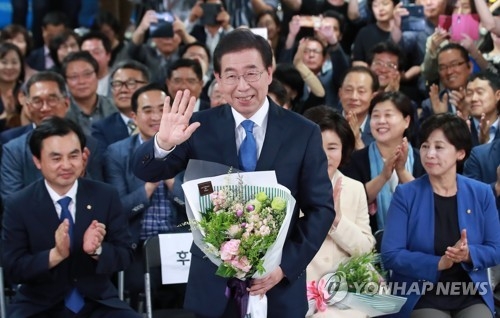