"We believe there is a need to consider various ways to further promote dialogue as long as serious discussions are being held between the United States and North Korea for the denuclearization of the Korean Peninsula and establishment of peace," Cheong Wa Dae spokesman Kim Eui-kyeom told reporters.

The remarks came one day after U.S. President Donald Trump said he will stop what he called expensive and provocative "war games" with South Korea as long as the North and the U.S. are "negotiating in good faith." 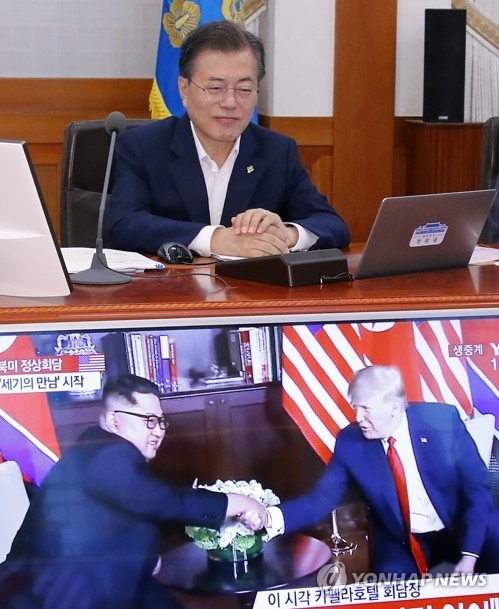 Trump's remarks came as a surprise to many in the U.S. and South Korea as the exercises are seen as integral to their alliance and their joint deterrence against possible aggression from the communist North.

The Cheong Wa Dae spokesman claimed it was still not clear what Trump meant by "war games."

"For now, there still is a need to find out the exact meaning and intention of President Trump's remarks," he said.

Seoul and Washington have long insisted that their joint military drills are strictly defensive. The U.S. currently maintains 28,500 troops in South Korea, a legacy of the Korean War.

South Korean President Moon Jae-in has called for an all-member meeting of the National Security Council (NSC) on Thursday to discuss such issues.

"Tomorrow's meeting is aimed at evaluating the outcome of the North Korea-U.S. summit held yesterday in Singapore and discussing follow-up measures to implement the agreement reached at the summit," Kim said.

The two Koreas technically remain at war as the 1950-53 Korean War ended only with an armistice.

The leaders of the divided Koreas agreed to make joints efforts to formally end the war in their two bilateral summits held on April 27 and May 26.

In a press conference following his summit with Kim, the U.S. president said his dialogue with Kim will eventually involve the South Korean president, apparently to formally end the war.