A Chinese plane with Kim on board touched down at Pyongyang International Airport at 7 a.m., according to Korean Central Television and Pyongyang Broadcasting Station (PBS). His arrival was unveiled 12 hours later.

Senior officials paid "enthusiastic and passionate" greetings in a ceremony.

The reports hailed Kim for "steering the geopolitical situations surrounding the Korean Peninsula and opening a new chapter in relations between North Korea and the U.S. with energetic external activities." 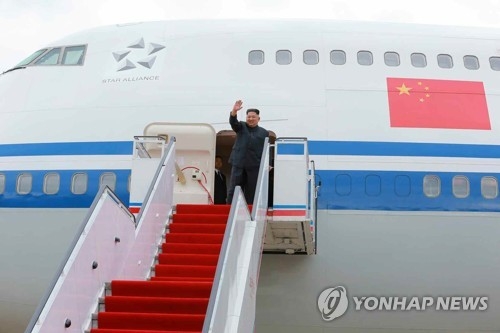 The media covered Kim's trip to Singapore in an unprecedentedly detailed manner.

"As the whole world is swept in huge interest in and excitement about the historic, unprecedented summit, Kim left his hotel on the night of 12th to return home after successfully wrapping up the North Korea-U.S. summit in Singapore," Korean Central TV reported.

It also reported that Singaporean officials, including Singaporean Foreign Minister Vivian Balakrishnan and Education Minister Ong Ye Kung, came out to Changi Airport to see him off. The report said they "celebrated" Kim "on the success of the summit."

For his part, Kim also thanked them for helping North Korea have a successful meeting with the United States, the report said.