SEOUL, June 14 (Yonhap) -- Seoul Mayor Park Won-soon cruised to his third consecutive victory in the mayoral election on Thursday, firming a solid political footing for himself as a potential presidential hopeful down the road.

With about a quarter of the votes counted, the ruling Democratic Party candidate garnered 57.2 percent, far ahead of runner-up Kim Moon-soo of the main opposition Liberty Korea Party with 21 percent. Ahn Cheol-soo of the Bareunmirae Party followed with 17 percent. The results are unlikely to change.

The victory has extended Park's time in office another four years until June 2022, and makes him the longest-serving chief of the capital, which has a population of roughly 10 million and an annual budget of some 30 trillion won (US$27.8 billion).

He was first elected to the mayorship in a by-election in 2011 after his predecessor Oh Se-hoon resigned due to a controversy over a free school meal policy. Park was reelected for a second term in 2014, a landslide victory against seven-term lawmaker Chung Mong-joon of the then-ruling Saenuri Party.

His third win is seen as strengthening his political clout as a potential presidential candidate from the liberal bloc going forward, since the post has largely been regarded as a springboard for the higher office.

Park avoided giving a direct answer about his future ambitions during this election campaign, but he declared a presidential bid before that resulted in a bitter defeat in the primary.

The 62-year-old made his name as an anti-establishment activist due to his long stint as a civil rights lawyer and philanthropist. He harnessed the experience as a backdrop to his policymaking in the administration.

As a three-term mayor, Park is expected to continue projecting his philosophy of building a "citizens-oriented" city into his key policies.

As a founder of South Korea's influential corporate monitoring and anti-corruption civic group, Park has emphasized the importance of grassroots democracy and autonomy that works to provide practical benefits for people's livelihoods.

Park touts a catalogue of policy achievements over the past two terms, many of which were aimed at realizing such pledges, including offering free school lunches, halving tuition fees at a city-run university and refurbishing old districts and city landmarks.

Among the latest projects was the creation of a "skygarden" named Seoul-lo 7017 that opened last year. A 45-year-old motorway flyover was remodeled into an elevated pedestrian walkway and public park with cafes and other amenities that leads to the inner city.

His city administration also completed the renovation of Sewoon shopping complex, a megastructure built in the 1960s that was once an old hub of electronic gadget shops until it ran down and became an eyesore. The mall has been refurbished into pedestrian overpasses and gardens and working space for industry startups.

Park has also assumed a positive stance toward inter-Korean exchanges. Amid warning relations on the Korean Peninsula in the wake of the historic June 12 summit between the United States and North Korea, the mayor vowed to push for Pyongyang's participation in next year's national sports competition and joint excavation of historic ruins, among other proposals.

On the eve of the election, Park raised his pitch in the campaign that he would visit North Korea "right away" if given a new term to initiate talks for the envisioned railroad project that connects Seoul and Pyongyang and goes as far as Europe. 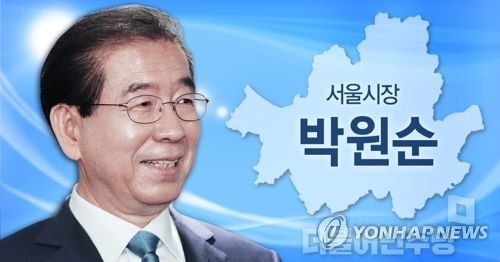