Shin's side had its first training in Russia after landing in the host nation of the 2018 FIFA World Cup on Tuesday. Before having an open training session at Spartak Stadium in Lomonosov, a suburb of St. Petersburg, Shin said the national football team plans to upgrade their defensive organization and work on details of their game plan against Sweden.

South Korea are in World Cup Group F, with Sweden, Mexico and Germany. The Taeguk Warriors will have their opening match in Nizhny Novgorod, Russia, on Monday.

"In St. Petersburg, we'll try to shore up our defensive organization," Shin said at a press conference. "From tomorrow, we'll try to build up our teamwork and work on set pieces and details." 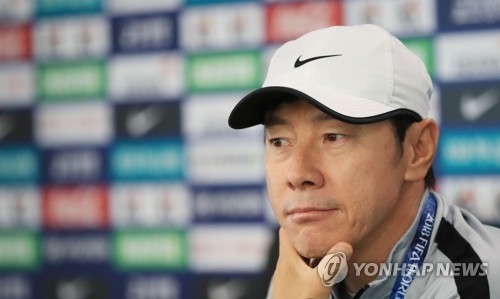 Before coming to Russia, South Korea played two World Cup tuneup matches in Austria but failed to collect victories. They first played to a scoreless draw with Bolivia and fell 2-0 to Senegal.

Shin, 47, however, said his team doesn't care much about tuneup results, although it's a pity that they couldn't collect a win, especially against Bolivia.

"Even though our players were tired, we just played the Bolivia match without pressure," he said. "It's a pity that we didn't collect a positive result, but we tried to test our game plans and tactics (for the Sweden match), which are now set in my head."

Shin had said it was a "trick" to start towering striker Kim Shin-wook with Hwang Hee-chan in the two-forward system used in recent friendly matches. When asked about frequent changes in their starting 11, with their World Cup contest less than a week away, Shin said there isn't much to be concerned about.

"Our best 11 is prepared for the Sweden match, and most of them have played matches together," he said. "We have a training program here with our best 11 players, so fans don't have to worry about it."