SAINT PETERSBURG, Russia, June 13 (Yonhap) -- South Korea's attacking ace Son Heung-min said Wednesday that he will try to prove his reputation on the pitch when the national football team competes at the 2018 FIFA World Cup next week.

Son is regarded as the best player on the South Korean squad by foreign media and World Cup opponents. The Tottenham Hotspur forward said he enjoys the spotlight on him but that it also gives him more responsibility on the pitch.

"I feel great when people say good things about me," he said after South Korea's open training session at Spartak Stadium in Lomonosov, a suburb of St. Petersburg. "But what's important is that I have to show it on the pitch. I know lots of people's expectations are on me, so I also feel responsibility."

South Korea are in World Cup Group F, with Sweden, Mexico and Germany. The Taeguk Warriors will face Sweden in Nizhny Novgorod on Monday to open their World Cup campaign.

Son, 25, reiterated that his team is focused on beating Sweden, who are currently training in Gelendzhik, Russia.

"It's not easy to have this kind of opportunity which comes once in four years," he said. "We're now in Russia, but what's important is whether I'm fit right now or not. I should be fit on the match day, and everyone is focused on our first match (against Sweden)." 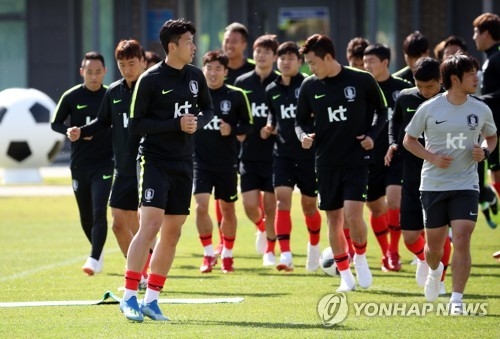 Son, who has 21 goals in 67 caps, said before he falls asleep, he imagines his movements and plays against Sweden.

"You can't always play like what you've imagined, but it's important that you are eager to do well and think about the match," he said. "I think lots of things, especially the things that I should do in the match."

Son will have his second World Cup in Russia. At the 2014 World Cup in Brazil, South Korea crashed out early from the competition with one draw and two losses. He said he hopes South Korea can avoid the same fate that they had four years ago.

"I think we're the weakest team in our group," he said. "The atmosphere, fans and attention are all different in the World Cup compared to other international matches. I hope our players can overcome those things and just focus on playing football."

Four years ago, Son dyed his hair yellow and competed at the World Cup. When asked why he didn't change his hair color for this year's World Cup, Son said he just wants to get attention with his performance.

"Whether you dye your hair or not, it's the same," he said. "Four years ago, I just thought I needed something to be more stylish, so I dyed my hair. But now, as a football player, I think that I need to make my name with my performance."