South Korea, led by head coach Shin Tae-yong, had an open training session at Spartak Stadium in Lomonosov, a suburb of Saint Petersburg, in front of some 250 fans and 100 reporters. It was their first training in the host nation of the 2018 World Cup after arriving at their base camp in St. Petersburg on Tuesday.

South Korea are in World Cup Group F with Sweden, Mexico and Germany. The Taeguk Warriors are scheduled to have their first match at Nizhny Novgorod Stadium in Nizhny Novgorod, Russia, on Monday.

In their 50-minute training session opened to the public, the national players held basic training exercises in front of fans, such as stretching, jogging and passing drills in a circle. South Korean head coach Shin Tae-yong said his side will do tactical training from Thursday.

During the open training, South Korean supporters chanted each player's name and spiced up the atmosphere at the training field. Some Russian fans also showed their support for star players like Son Heung-min. Wednesday's training was also attended by some 50 South Korean residents in St. Petersburg.

At the end of training, the South Korean players signed autographs and took selfies with their fans to respond to the fans' support.

Following media interviews, the South Korean players headed back to their residence, New Peterhof Hotel, which is about a 15 to 20 minute drive from the stadium. 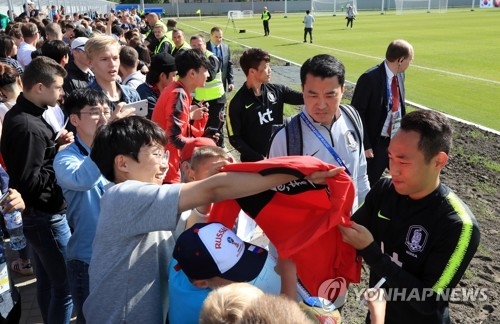