The South Korean squad of 23 players arrived in Russia's second-largest city on Tuesday after completing their nine-day training in Austria, where they also had two friendly matches.

South Korea, led by head coach Shin Tae-yong, have selected New Peterhof Hotel as their team residence during their stay in St. Petersburg. Spartak Stadium in Lomonosov, which is about a 20-minute drive from the hotel, is their training ground.

"I went to Saint Petersburg three times before selecting the city as our World Cup base camp," Shin said before the team's open training session. "Hotel officials are taking good care of us, and I'm satisfied with everything." 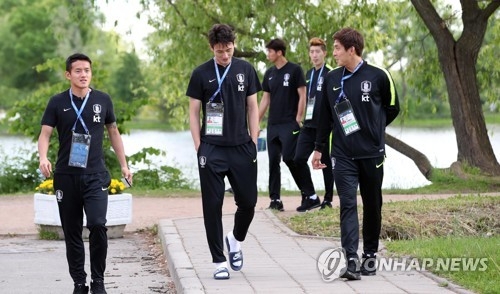 New Peterhof hotel, which opened in 2010, is surrounded by beautiful scenery. Behind the hotel is the famous Olgin Pond and Kolonistskiy Park. The upper park of Peterhof Palace can be also seen from the hotel.

South Korea rented two buildings of the hotel, and each player will get his own room. The players will also eat food prepared by two chefs who traveled along with the national team.

St. Petersburg is known for white nights. In this period of time, sunset occurs usually after 10 p.m., while the sun rises around 4 a.m.

Shin, however, said the players are maintaining good biorhythms and are staying healthy.

"When we trained in Austria, we also had late sunset and early sunrise," he said. "We've installed blackout curtains and sun protection blinds on every room, so we had no problem."

The players also said white night isn't much of a concern in their World Cup preparations.

"Sleeping is important to every athlete, so I just try to close the curtain and get a good sleep," said South Korean forward Son Heung-min. "It's just been one day, but our staff really worked hard to make a comfortable environment for us to play a good game."

South Korea are in World Cup Group F with Sweden, Mexico and Germany. The Taeguk Warriors will have their opening match in Nizhny Novgorod, Russia, on Monday.