Oh held the Tampa Bay Rays off the board in his one inning of work, but the Jays went on to lose 1-0 at Tropicana Field in St. Petersburg, Florida, on Wednesday (local time).

Oh relieved starter J.A. Happ to begin the bottom of the sixth. The right-hander struck out his first batter, Willy Adames, before hitting C.J. Cron with a first-pitch fastball.

But Cron was forced out at second on a grounder by Joey Wendle, and Oh got Carlos Gomez to go down swinging on a 1-2 fastball to end the inning.

Matt Duffy's two-out single in the bottom of the ninth completed the three-game sweep for the Rays.

Oh has settled down and tossed 3 2/3 scoreless innings in four appearances since getting roughed up for six earned runs in 1 2/3 innings against the Detroit Tigers and the Baltimore Orioles in back-to-back outings earlier this month. Oh has shaved his ERA from 4.00 to 3.52 over his past four games.

A former closer with the St. Louis Cardinals and the Korea Baseball Organization's career saves leader, Oh was expected to get some save opportunities after Toronto lost All-Star closer Roberto Osuna, who was taken off the active roster on May 8 after getting charged with assault.

But Tyler Clippard and later Ryan Tepera took over the closing duty in Osuna's absence. 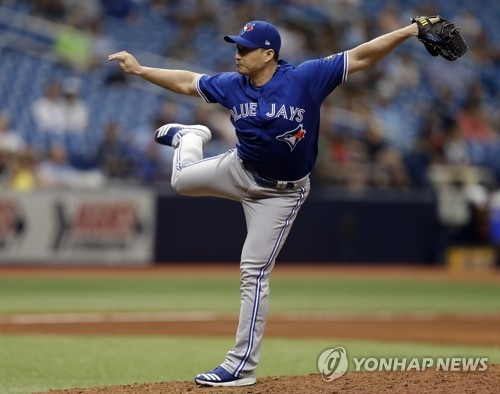