SEOUL, June 14 (Yonhap) -- South Korea's central bank chief said Thursday that the latest interest rate hike by the U.S. Federal Reserve may have a limited impact on S. Korea, as the market widely expected the adjustment.

The U.S. Fed raised its benchmark overnight lending rate a quarter of a percentage point to between 1.75 percent and 2 percent and signaled two more rate increases by the end of this year.

"The market sees that the Fed became more hawkish than it was in March, but they are not surprised by it," Bank of Korea (BOK) Gov. Lee Ju-yeol told reporters. "The impact of the rate hike and the faster pace of rate increases on the South Korean market should not be worrisome."

Following the Fed's June increase, the rate spread between South Korea and the United States widened, raising concerns that a higher U.S. rate may cause an outflow of foreign capital from South Korea.

Some watchers have said the BOK has to seek the best timing to raise the key rate in the second half so as to keep up with the U.S. Fed's rate hike schedule for 2018.

But the top monetary policymaker said the rate difference is not the only factor encouraging investors to pull their money out of the market.

"Rate increases will not immediately trigger capital outflux as investors consider various factors," said Lee. "But this time, the most important thing is financial turmoil in some emerging markets."

He said international capital movements and investors' appetite for risky assets will be affected by the speed of Fed's monetary normalization and the European central bank also gave some signs of monetary tightening.

The BOK chief said the central bank will keep closer tabs on financial and economic issues at home and abroad.

At the next monetary policy meeting, slated for July 12, the central bank will decide whether to raise the base rate or not. The BOK lifted the rate to 1.5 percent from an all-time low of 1.25 percent in November last year. 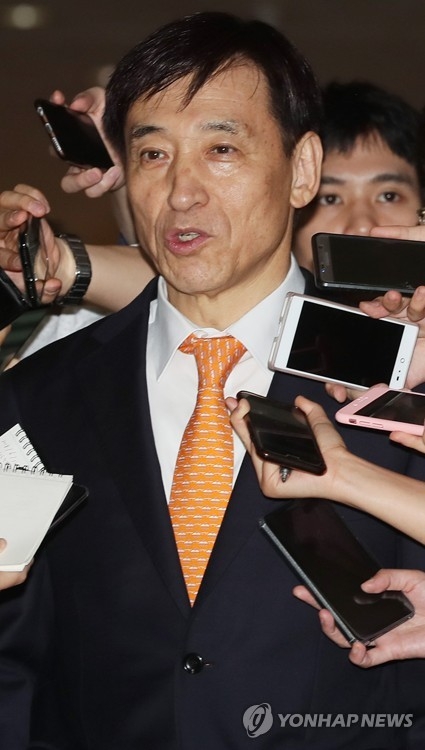