KAZAN, Russia, June 27 (Yonhap) -- South Korea stunned Germany 2-0 while being eliminated in the group stage at the FIFA World Cup on Wednesday, bringing the defending champions down with them.

South Korea needed to beat Germany by at least two goals and have Mexico defeat Sweden in the other Group F match Wednesday. The Taeguk Warriors took care of their own end at Kazan Arena in Kazan, some 800 kilometers east of Moscow, with Kim Young-gwon and Son Heung-min each scoring in second-half stoppage time. But Sweden made it all moot by beating Mexico 3-0 in Ekaterinburg.

Germany unceremoniously bowed of the tournament with three points, losing to South Korea in goal difference and becoming the third straight World Cup champions to miss the knockout stage in title defense. 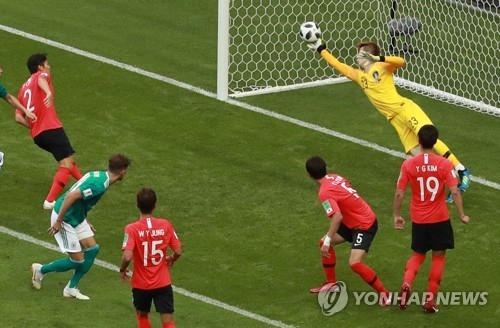