SEOUL, July 1 (Yonhap) -- Five years from its establishment, South Korea's tertiary bourse has marked sharp growth on the back of state support for venture firms and startups, its operator said Sunday.

The Korea New Exchange (KONEX) market opened on July 1, 2013, to trade shares in small and medium-sized businesses so as to provide them with the capital they needed to grow.

Since then, its market capitalization has spiked 14.1-fold to stand at 6.62 trillion won (US$5.94 billion) as of Friday, with the figure surging to a record high of 6.8 trillion won in January this year, according to the Korea Exchange (KRX).

On the first trading day, 21 firms were available on the market, but now 150 companies are listed on the tertiary bourse. So far, 37 firms have moved from the KONEX to the second-tier KOSDAQ market and seven are now being prepared for transfer, according to the KRX.

The market has served as a key platform for aiding fledgling businesses to grow in their initial stages by allowing them to raise funds more easily via stock sales, the KRX said. It noted that 113 listed companies have raised 693.6 billion won over the past five years.

"The KONEX market has successfully played a role as a stepping stone for small firms, as is shown in cases where firms grew enough to move on to the KOSDAQ market," the bourse operator said. It vowed additional support to help companies smoothly settle in the capital market.

"In order to attract more investors so as to boost liquidity, we will create diverse funds products and provide more investment information," the KRX added. 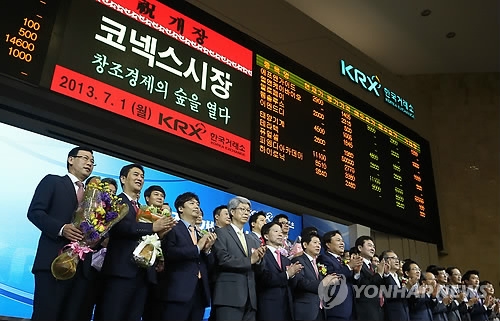