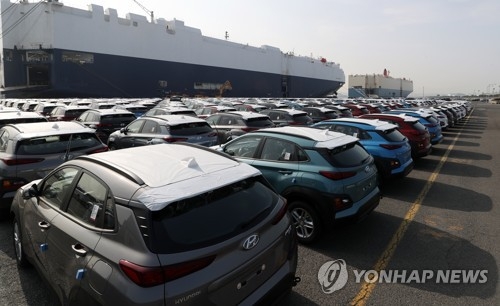 The cumulative exports of Asia's fourth-largest economy rose 6.6 percent to $297.5 billion in the first half of this year, the highest-ever to-date, the ministry said.

Average daily exports stood at $2.38 billion in June -- the second-highest figure -- but posted an on-year decline as the local shipbuilding industry posted record-high exports of $7.37 billion in June 2017. The number of working days was cut by 1.5 days from a year earlier due to local elections.

Shipments of semiconductors jumped 39 percent to $11.16 billion last month on upbeat sales of high-value memory chips and storage devices in major markets, including China and the United States.

Overseas sales of petrochemical products rose 17.6 percent to exceed $4 billion for seven months in a row for the first time, aided by strong demand and rising oil prices.

In contrast, exports of vehicles declined 9.9 percent due to sluggish sales in the North American market and expanded production in overseas factories.

Outbound shipments of flat panel displays also dipped 10.5 percent in the face of tougher competition from Chinese rivals and a global supply glut.

The industry ministry said the country's outbound shipments in the first half of this year posted an all-time high thanks to brisk memory chip sales and rising oil prices, but it cited rising trade protectionism in major economies and volatility in the global financial market as potential risks.

"There's lingering uncertainty for South Korea's exports because of rising trade protectionism in major economies and increased volatility in the global financial market in the wake of the U.S. interest rate hike and its effect on emerging economies," Industry minister Paik Un-gyu said in a release. "The government will take proactive measures against the downside risks in the latter half of this year, including slowing growth in major export items and a high base effect."