The new change, effective for businesses with more than 300 employees, public institutions and government offices, is expected to bring as big a sea change in everyday life as the five-day-work-week introduced in 2004 did.

Under the new system, Korean workers cannot work over 52 hours per week -- they are allowed 40 hours of regular work and 12 hours of extra work time. If the rules are not followed, a business owner can face up to two years in prison or a fine of up to 20 million won (US$17,945).

Korean businesses have been bracing for the system for the past few months by hiring more workers, overhauling their working hour systems and adopting flexible hours to meet their particular needs.

The Ministry of Labor expects businesses to adopt to the new system without much of a hitch, as many larger Korean big businesses and their subsidiaries have already implemented it.

A survey carried out last month by the ministry on 3,627 businesses with more than 300 workers showed that 59 percent had already enforced the 52-hour maximum workweek. 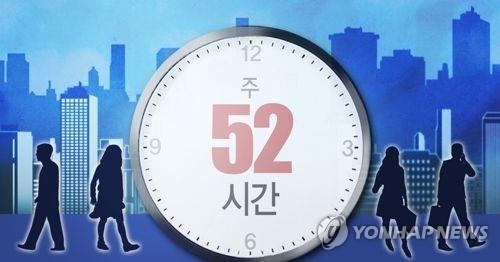 The problem lies with small and medium-sized companies as they have been facing a variety of difficulties, including trouble hiring new people.

Given the circumstances, the government is implementing a six-month grace period for those companies to take their time in applying the change and allow the system to take root. In order to oversee a smooth transition, the labor ministry hired 200 labor supervisors in the first half of the year and plans to hire another 600.

"We will thoroughly monitor whether companies implement the lower working hours in the right manner based on the recent survey results," a labor official said.

As the system has just been adopted, there will inevitably be some confusion in many workplaces. Some companies want a more flexible application of the system, citing workloads that can be heavier some weeks and quieter others.

Companies with 50~300 workers should implement the regulation starting January 1, 2020, and those with 5~50 should do so on July 1, 2021. Twenty one business sectors, including finance, broadcasting and postal services, must apply it from July 1, 2019.

South Korean political circles had mixed reactions to the new system. The ruling Democratic Party issued a statement welcoming the introduction and calling for full support, while opposition parties voiced concern about possible side effects.

The ruling party's statement noted there will be some trials and errors, but the system will eventually take root. It called for bipartisan support for the system to run smoothly and improve the lives of Korean workers.

The main opposition Liberty Korea Party, on the other hand, claimed that some people will be forced to look for part-time jobs to supplement their earnings as they will not be allowed to do overtime work. It called on the government to make up for any problems by being more flexible in the implementing the new rules.