SEOUL, July 1 (Yonhap) -- The brand value of Korean Air Lines Co. fell sharply in the second quarter over a series of allegations involving the family that owns it, an appraisal website showed Sunday.

The flag carrier's brand value ranked 36th in the April-June period, down from 11th a quarter earlier, according Brandstock, a South Korean market research firm that determines the rankings of local brands.

The decline reflects the intense public fire directed at Korean Air Chairman Cho Yang-ho's family over a series of allegations of physical and verbal abuse, as well as smuggling and tax evasion.

Cho's younger daughter, Cho Hyun-min, allegedly threw water in the face of an advertizing agency manager during a meeting in March in a fit of anger, behavior that has sparked public outrage against the family. Cho Yang-ho and his wife -- Lee Myung-hee -- were also questioned over separate allegations.

Cho Hyun-min is the younger sister of Cho Hyun-ah, who gained global notoriety for the "nut rage" incident in 2014. Cho Hyun-ah forced a plane back to the boarding gate at New York's John F. Kennedy International Airport because she was upset with the way her nuts were served -- in an unopened bag instead of on a plate. 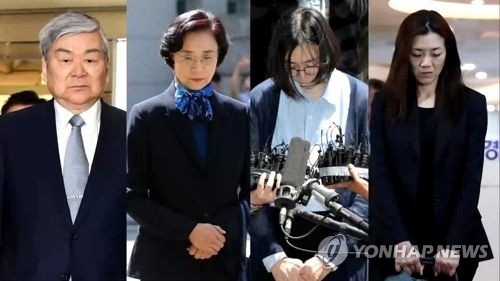 It also said the brand value of KEB Hana Bank fell to 94th place in the second quarter, down 26 notches from the first quarter following probes by South Korea's financial regulator and prosecutors over alleged hiring irregularities at the lender.

Meanwhile, Samsung Electronics Co.'s smartphone brand Galaxy -- which was selected as South Korea's most valuable brand for the seventh consecutive year in 2017 -- retained the top spot in the second quarter, according to Brandstock.