SEOUL, July 1 (Yonhap) -- South Korea has delivered its opposition to the United States' move to impose tariffs on imported autos through various channels as part of efforts to minimize the fallout for the local automotive industry, Seoul's trade ministry said Sunday.

The policymaker met with Rep. Terri Sewell of Alabama and Sen. Johnny Isakson from Georgia as well as Matt Blunt, president of the American Automotive Policy Council, along with other policymakers.

"Paik expressed concerns that the proposed auto tariffs could undermine the mutually beneficial trade environment created under the free trade agreement implemented by South Korea and the U.S.," the ministry said in a release. "He also asked for support from American politicians and business leaders, noting Seoul accepted the U.S. concerns in the auto sector in the revised FTA, which was agreed in principle on March 28." 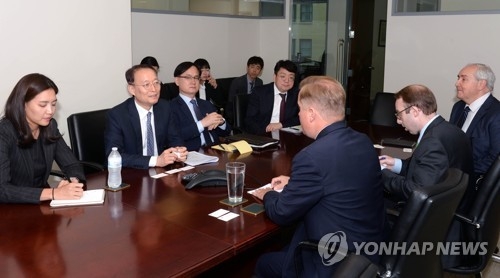 Paik's outreach efforts came after the U.S. Department of Commerce in May launched an investigation into possible tariffs on imported vehicles on national security grounds under Section 232 of its trade law.

On Friday, the ministry also submitted a written statement claiming South Korean autos do not pose a risk to U.S. security and said it will send a delegation to a public hearing slated for July 19-20 in Washington.

The fresh investigation is another headache for the local auto industry after Seoul largely accepted U.S. demands for greater access to its auto market in a recently revised FTA between the two nations.

While Korean-made autos are exempt from U.S. duties under the bilateral trade pact implemented in 2012, Seoul officials have worried that new tariffs imposed under Section 232 could deal a heavy blow to local manufacturers and parts makers.

Out of 2.53 million Korean vehicles sold abroad last year, about 33 percent were shipped to the U.S., according to data compiled by the Korea Automobile Manufacturers Association. South Korea exported 178,980 vehicles to the key market in the first quarter of 2018, down 22 percent from a year earlier.