"We have put off new building plans for some 90-100 army units categorized as Alpha in the Forward Edge of Battle Area (FEBA)," a government official familiar with the matter said. The FEBA has four categories -- Alpha, Bravo, Charlie and Delta -- and Alpha is the nearest to the DMZ and within the Civilian Control Line, where reconnaissance, artillery and information battalions are stationed.

The decision is believed to be Seoul's effort to uphold part of the April 27 Panmunjom Declaration in which the two Koreas agreed to carry out disarmament in a phased manner and to be ready to move frontline bases further from the border if necessary. 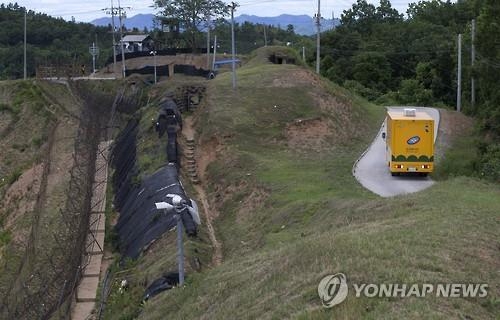 Another official, who requested anonymity, said, "As inter-Korean relations improve further and security conditions change, there will be a need for additional changes in frontline areas. ... If we proceed with the planned construction now, the cost would be large when alterations need to be made."

Still another official said the move can be understood in light of minimizing any future expense in the advent of a shift in security conditions on the Korean Peninsula.

The two Koreas are expected to further discuss a series of measures to endorse the declaration to alleviate the acute military tension in border areas.

An official from the Ministry of Defense told Yonhap News Agency that a discussion is going on internally about construction projects for military facilities in the FEBA to "preemptively" prevent any waste of military budget. The ministry is said to be determining the details on future projects after closely discussing the matter with relevant government agencies.