The Korean Central News Agency reported that Kim visited the factory in Sinuiju, which neighbors China's Dandong, accompanied by his wife, Lee Sol-ju, and other high-ranking officials.

Sinuiju was designated as a special economic zone by his father, Kim Jong-il, back in 2002.

On Saturday, Kim visited another border county, Sindo in North Pyongan Province, which belongs to the Hwanggumpyong Exclusive Industrial Zone co-developed with China. 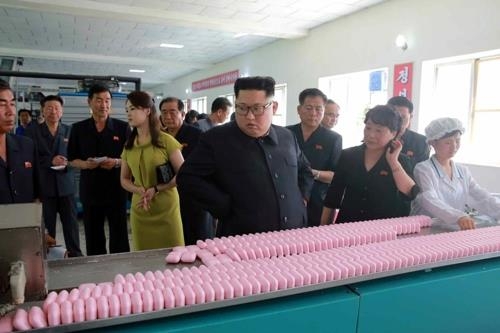 Among his entourage was Kim Song-nam, the first vice director of the ruling Workers' Party of Korea's international department and a known expert on China. The fact that he accompanied the leader on the two visits hints that the trips are likely aimed at promoting economic ties with China.

The factory, founded in 1949, is the North's first large-scale production base for cosmetics products and is believed to produce the brand "Spring Scent."

The media quoted Kim as saying, "We shouldn't settle for the past success but aim higher and continue developing."

He also emphasized the modernization of the facilities and ordered the building of a shop in Pyongyang to sell the brand's cosmetics directly to consumers, according to the report.