SEOUL, July 1 (Yonhap) -- As South Korea entered its annual rainy season with a typhoon approaching its shores on Sunday, heavy rain has drenched the country, resulting in floods and canceled flights and railways services.

The Ministry of the Interior and Safety on Sunday preemptively sent officials to provincial governments nationwide to check and contain damage caused by the 7th typhoon "Prapiroon."

Six metropolitan cities and 11 provinces will get two officials each while two will be dispatched especially for Jeongseon, a small county in Gangwon Province, out of fear that heavy rain will lead to major landslides.

Torrential rains have hit the nation hard since Saturday, causing houses and rice paddies to flood and some railway services to stop. A total of 383 trails in 13 national parks were closed while 18 flights between Gimpo and Ulsan were canceled. Since 7 p.m. Saturday, the Cheonggye Stream in downtown Seoul has been closed to pedestrians.

At 5 p.m. the ministry will convene a video conference with disaster officials throughout the country to check up on the natural disaster preparations. With the typhoon quickly nearing the peninsula, the government is considering setting up a disaster center to better coordinate safety measures. 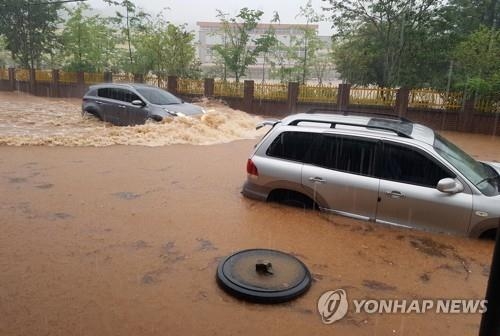