SEOUL, July 1 (Yonhap) -- Doosan Corp. said Sunday that it will break ground on a plant in Hungary in December to produce battery copper foil, a key component of electric vehicle batteries.

The plant -- set to be completed in Tatabanya Industrial Park in Hungary in October in 2019 -- will have an annual production capacity of 50,000 tons of battery copper foil, enough for batteries for about 2.2 million electric vehicles.

The plant will make Doosan Corp. the sole supplier of battery copper foil in Europe.

Doosan said it has made the investment decision on the expectation that there will be a growing demand for battery copper foil on the continent.

Global carmakers have been racing to go electric amid tightened regulations on emissions of greenhouse gases, which scientists say are to blame for global warming.

In 2014, Doosan Corp. acquired a 100 percent stake in Circuit Foil Luxembourg, a maker of copper foil. 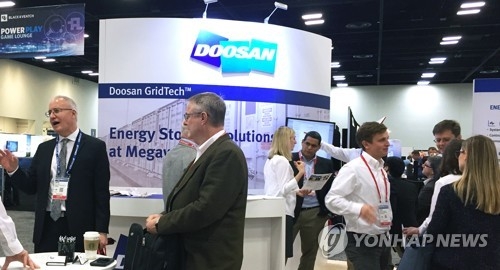 Doosan to break ground on plant in Hungary in December

Doosan to break ground on plant in Hungary in December