WASHINGTON, July 1 (Yonhap) -- U.S. President Donald Trump has said he believes North Korea is "very serious" about dismantling its nuclear weapons program as skepticism persists over whether the regime will follow through on its denuclearization pledge.

Trump told Fox News in an interview aired Sunday that he believes North Korean leader Kim Jong-un meant it when he committed to denuclearization at their historic meeting in Singapore earlier this month. 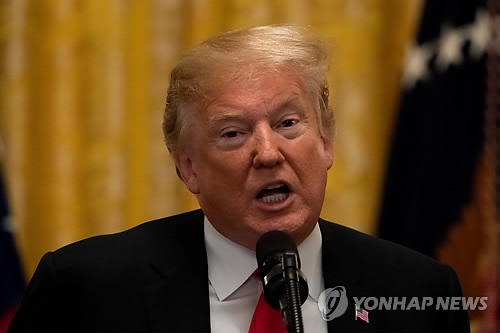 "Oh, I think they're very serious about it," Trump said. "I made a deal with him. I shook hands with him. I really believe he means it."

A joint statement signed by Trump and Kim after the summit called for "complete denuclearization" of the Korean Peninsula in exchange for security guarantees from the United States. It did not specify a method or timeline for implementation, leaving the details to be worked out in follow-up negotiations.

U.S. Secretary of State Mike Pompeo is expected to travel to Pyongyang in the coming days to continue the talks.

"We had a very good chemistry," Trump said of his meeting with Kim. "You know, we had a lot of points ... Not to go over them, but denuclearization, getting the remains back from great heroes, great people. So many different things."

North Korea agreed at the summit to repatriate the remains of American soldiers killed in the 1950-53 Korean War.

Trump defended himself from criticism that he gave too many concessions to the North, including the suspension of South Korea-U.S. joint military exercises that North Korea calls an invasion rehearsal.

"Now, we're saving a lot of money by not doing -- I asked -- I said let's not do the -- I call them the war games, OK?" Trump said, referring to the exercises. "They're dropping bombs all over the place every six months. It's unbelievably expensive to do that. The planes fly in from Guam, these massive, you know, bombers.

"So, we gave nothing. What we are going to give is good things in the future. And by the way, I really believe North Korea has a tremendous future. I got along really well with Chairman Kim," he said.