Bolton unveiled the plan during an interview with CBS, saying U.S. Secretary of State Mike Pompeo will take the lead on the issue.

"We have developed a program. I'm sure that Secretary of State Mike Pompeo will be discussing with the North Koreans in the near future about really how to dismantle all of their WMD and ballistic missile programs in a year," he said, referring to weapons of mass destruction.

U.S. President Donald Trump and North Korean leader Kim Jong-un held a historic meeting in Singapore earlier this month to discuss the North's denuclearization. Kim committed to work towards the "complete denuclearization" of the Korean Peninsula in exchange for security guarantees from the U.S.

The agreement did not specify a method or timeline for implementation, leaving the details to be worked out by Pompeo in follow-up negotiations with the North. 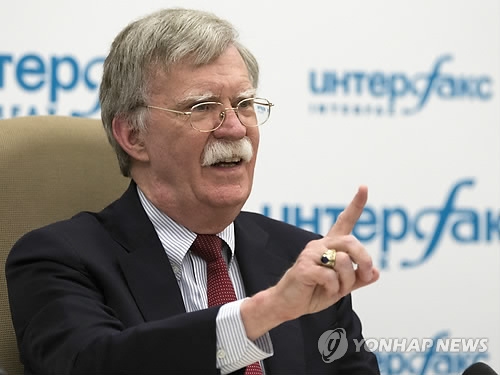 "What our experts have devised is a program that, with North Korean cooperation, with full disclosure of all of their chemical and biological, nuclear programs, ballistic missile sites ... physically, we would be able to dismantle the overwhelming bulk of their programs within a year," Bolton added, noting that North Korea has yet to make the disclosure.

If North Korea has made a strategic decision to denuclearize, the process can move quickly and bring the impoverished nation sanctions relief as well as aid from South Korea, Japan and other nations, according to Bolton.

"The president would like to see these discussions move promptly to get a resolution," he said. "This has been the advice that China's leader, Xi Jinping, has given us as well. So we're going to try and proceed to implement what the two leaders agreed to in Singapore."

In a separate interview with Fox News, Bolton revealed that Kim had asked for a photo together during their meeting in Singapore.

"At one point in our lunch, Kim Jong-un said to me, 'You know, the two of us have to get a picture together. I want to take it home and show my hardliners you're not such a bad guy,'" he recalled.

Asked how he felt about the request, Bolton said, "Wonderful."

The national security adviser served as U.S. ambassador to the United Nations from 2005-2006, and under secretary of state for arms control and international security from 2001-2005. At the time, he made a series of remarks highly critical of the regime in Pyongyang and then-leader Kim Jong-il, the current leader's father.

The North unleashed vituperation in response, describing him as "human scum," "devoid of reason," "an ugly fellow who cannot be regarded as a human being" and a "bloodthirsty fiendish bloodsucker," among other things.