In a weekly survey conducted by Realmeter, 71.5 percent of 2,502 respondents said they approved of the way the president managed state affairs.

The reading marks a very high approval rating for a South Korean president in his or her second year. However, it also marks a plunge of 3.9 percentage points from a week earlier, as well as three consecutive weeks of decline.

The local pollster partly attributed the drop to a recent controversy over the posthumous conferment of a state medal to the late former Prime Minister Kim Jong-pil, who remained in South Korean politics for more than four decades but is accused of collaborating with the military dictatorship of the late former President Park Chung-hee. 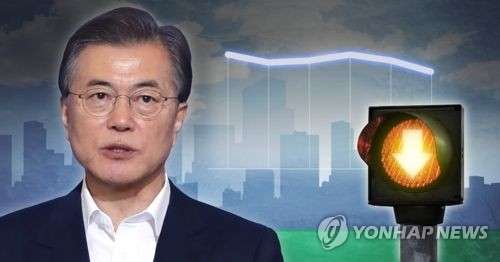 The on-week drop, however, also follows what Seoul and Washington have called a temporary suspension of their joint military drills. The allies said their joint military exercises here will be suspended as long as they are having denuclearization dialogue with North Korea in good faith.

Moon's approval rating had surged to a record high of 78.3 percent in the week following his historic summit with North Korean leader Kim Jong-un on April 27.

The progressive Justice Party, despite being the smallest in size, remained the third most popular party with an approval rating of 9.4 percent, up 1.4 points from a week earlier.

The minor opposition Bareunmirae Party's approval rating advanced 1.1 points to 6.2 percent, while that of the liberal Party for Democracy and Peace slipped 0.7 point to 2.3 percent.