SEOUL, July 2 (Yonhap) -- South Korean exports of SUVs are expected to reach a new all-time high this year despite a drop in the country's overall overseas auto sales, a trade group said Monday.

Overseas SUV shipments by five automakers in South Korea came to a combined 560,772 units in the first five months of the year, up 4.7 percent from a year earlier, according to the Korea Automobile Manufacturers Association (KAMA).

The figure contrasted with a 7.4 percent on-year decline in overall auto exports to slightly over 1 million vehicles during the same period.

Exports of SUVs stood at a mere 196,000 units in 2000, but the number continued to rise before exceeding the 1 million mark in 2013. Last year, overseas SUV shipments rose for the fifth consecutive year, reaching 1.29 million units.

In light of the growth trend for the January-May period this year, SUV exports are tipped to hover well above 1.3 million units and reach a new record high for all of this year. 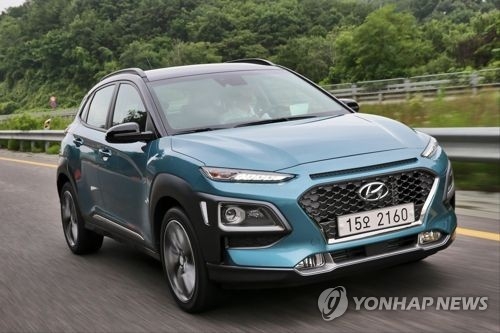 Exports of SUVs are expected to gather further momentum in the second half of the year as Hyundai Motor Co. and Kia Motors Corp. -- the top two players in the country -- are slated to roll out the upgraded versions of their Tuscon and Sportage SUVs, respectively, they added.

Increasing exports of SUVs come as a big boon for local automakers struggling with slumping overseas sales as they bolster their profitability.

Local automakers' overall exports have fallen for six years running, and they are faced with such negative external factors as the U.S. government's move to impose tariffs on auto imports.
(END)